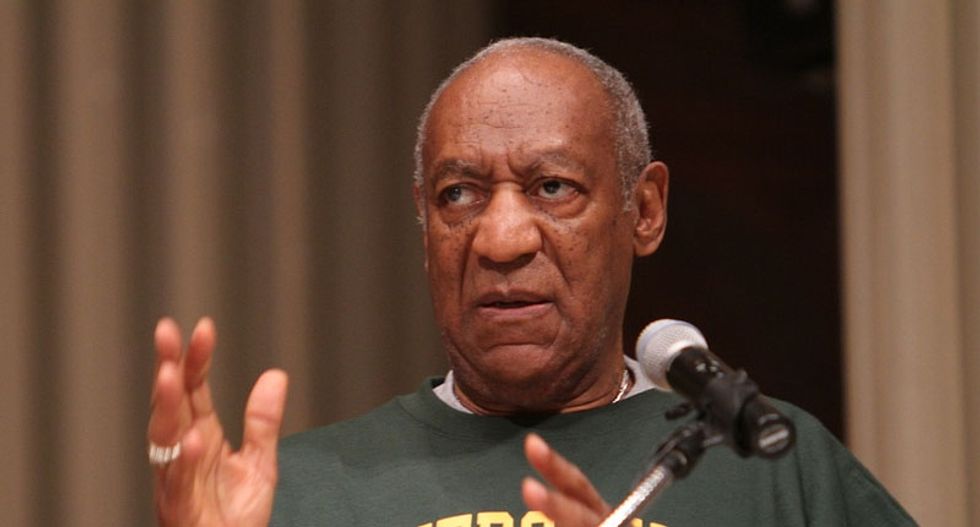 During his trial on sex assault charges, Bill Cosby has mostly remained silent in court and avoided reporters' questions. But when fans have called out to him outside the courtroom, the 79-year-old has responded with attempts at humor.

Mugging in front of the cameras this week after a fan said it was her birthday, he asked, "How old?"

When the woman replied, "49," he did a mock stumble in an apparent reference to a famous standup special he did about the challenges of nearing 50 years of age.

On another occasion, Cosby responded to a fan by offering up the famous "Hey, hey, hey" catchphrase from Fat Albert, the animated character he voiced in the 1970s.

Inside the courtroom, he has been largely expressionless, his only reactions an occasional chuckle at a courtroom joke or a shake of the head as two of his accusers testified that he drugged and sexually abused them.

On Wednesday, in the midst of testimony from the main accuser, Andrea Constand, Cosby was walking down a hallway when a court officer spotted someone using a cell phone.

"Put that phone away!" the officer thundered, worried the person may have been trying to snap a photo. Cosby, who is legally blind, jumped at the shout before pointing his cane like a weapon at the officer and saying, "What'd you say?" as observers tittered.

Cosby's career has been derailed by dozens of sexual assault allegations from women stretching back decades, all of which he has denied.

His interactions with fans outside the courthouse, coupled with a parade of show business friends who have attended the trial in support, have signaled he is intent on repairing his public image.

His spokesman, Andrew Wyatt, told Reuters that Cosby got into his vehicle after a fan interaction outside court and told him, "Restoration of legacy," showing his reputation is on his mind.

In an interview before the trial, Cosby told a radio host that he hopes to resume touring afterward.

A handful of protesters have at times stood outside the courthouse, yelling "guilty" as Cosby walked by.

Conspicuously absent from the proceedings thus far has been Cosby's wife of 53 years, Camille Cosby. Instead, he has been accompanied each day by actors and comedian friends, including Keisha Knight Pulliam, the woman who played his youngest daughter Rudy Huxtable on the 1980s television comedy, "The Cosby Show."

Cosby's spokesman Wyatt said Camille Cosby continues to stand by her husband and may still attend the trial at some point, though he added that Bill Cosby wants to protect his family from the media frenzy.

Wyatt, who is staying at Cosby's Pennsylvania home where Constand says she was assaulted in 2004, said Cosby recognizes the gravity of his situation but has remained confident and in good spirits.

"He's Bill Cosby," Wyatt told Reuters. "He's the greatest comedian of all time. Trust me, he takes this matter very seriously. But he has to continue being who he is: someone who loves laughter, loves comedy, loves life."