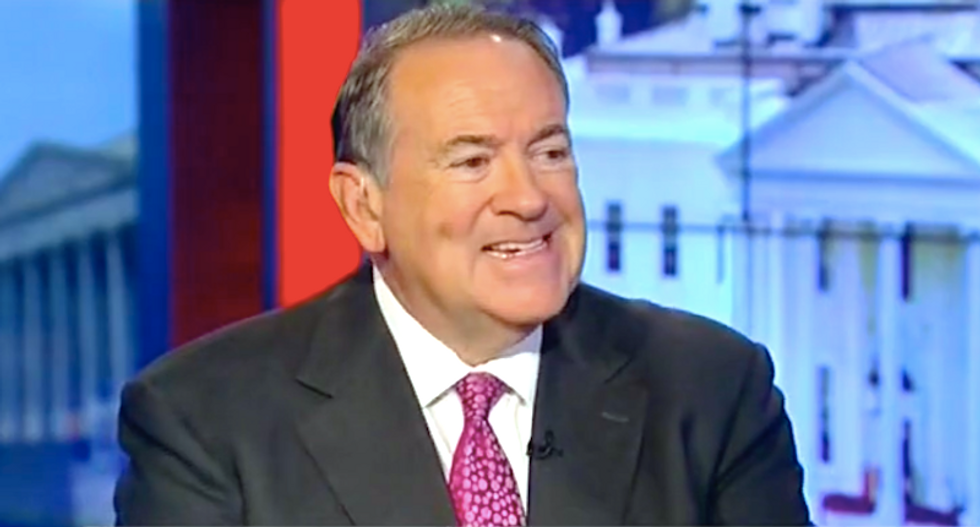 "That really is the essence of this," Huckabee said. "There was no screaming about Russia involvement when we knew it and even when the president was talking about it. It didn't happen until after the results were in and Donald Trump won and Hillary Clinton lost. That's what makes all of this really, to use a term, fake news."

In fact, the FBI began investigating possible collusion between the Trump campaign and Russia in July 2016, according to testimony by the agency's former director, James Comey, who declined to say publicly whether any evidence had been uncovered to prove those allegations.

"There wasn't any collusion and nobody has been able to say that any one of the Trump campaign was involved and talking to Russia, and quite frankly what could they do about it?" Huckabee said. "The people in power were the Obama people, and they basically looked the other way. In September of last year, Obama said, 'I told (Russian President Vladimir) Putin (to) cut it out. Now, that's really a worthy threat -- that had some real power."

Trump has cast doubts on the consensus view by U.S. intelligence agencies that Russia interfered in the presidential election, until he found a way to blame those efforts on Obama -- and Bream and other Fox News anchors have followed suit.

"Interestingly, in that time frame, I believe it was in September, two top Democrats -- one from the House and the Senate were so frustrated in their attempts to get the administration to tell the American people what was going on that they went public themselves," Bream said. "Adam Schiff (D-CA) on the House side and Dianne Feinstein (D-CA) in the Senate, and said why aren't you doing more? We think people need to know."

The two California Democrats did issue a statement in September, following a similar warning in July, intended to put pressure on the Obama administration to stop Russian meddling, although they did not directly criticize the president.

Those statements would seem to undercut Huckabee's comments earlier in the segment, and ignores reporting by the Washington Post that shows the White House asked top lawmakers in mid-September to sign on to a bipartisan agreement urging state and local officials to take federal help in protecting voting systems from Russian hackers.

But, according to several officials who spoke to the Post, Senate Majority Leader Mitch McConnell threatened to politicize any White House efforts to push back against Russian interference in the weeks ahead of the election.

"What makes all of this so powerful is the Democrats themselves are on camera, they are the ones who are saying, but all before the election," Huckabee said. "Before the election they were concerned that something might be happening. But, after the election, then they believed that it was Donald Trump. Again, it's a false narrative."

He called for a shift in the congressional investigation to focus on the Obama administration.

"I think more and more there is going to be an investigation, and the Democrats will rue the day when they asked for one, demanded it, and when the results come back they will say, 'Oh, what have we done?'" Huckabee said.

Lawmakers still plan to question members of Trump's inner circle, including his son-in-law Jared Kushner and longtime personal bodyguard Keith Schiller, and special counsel Robert Mueller is just beginning his own probe -- but Huckabee suggested Trump had already been cleared.

"No evidence, zero, this is what President Obama said back in October, no evidence that there was even the ability ever to the Russians to impact a vote or hack the election machines," Huckabee said. "That would have been a real serious issue. Look, Shannon, I want to be very clear. It's serious if the Russians are trying to somehow influence elections, even if it's with fake news."

Now that he's president, senior administration officials say they're having a hard time convincing Trump that Russia remains a threat, and he's taken no steps to punish the Putin government for its interference in the 2016 election.

"I don't want us to be naive and kid ourselves," Huckabee said. "Do you not think the U.S. intelligence agencies are trying to get involved in the elections of foreign governments all over the world? If we don't think they are, then either we are incredibly short-sighted and naive or our agencies are incredibly ineffective."