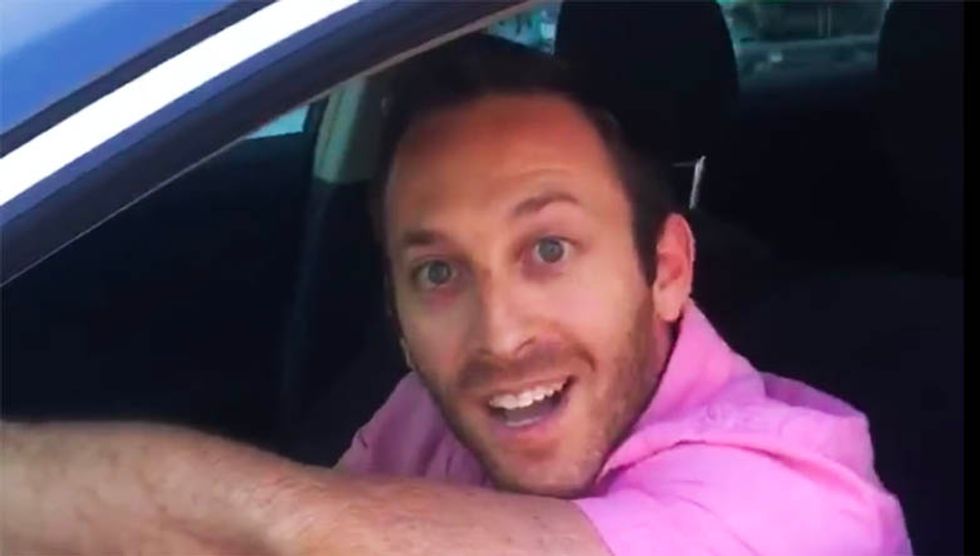 In a video clip posted to Facebook, a California woman filmed a run-in she had with a motorist while she was riding on her bike accompanied by her 9-year-old daughter, that ended with the man calling her a "f*cking Cambodian n*gger."

According to Paula Nuguid she was on her bike in Sunnyvale - and was attempting to make a legal left turn -- when the man began to lean on his horn and then called her a "b*tch."

"This happened to me today at 4:33pm as I was traveling south on Frances St in the downtown area of Sunnyvale, California, which is part of Silicon Valley. I was trying to make a legal left into a parking lot where Frances St and Olsen St intersect. His claim I made an illegal right is absurd. I was traveling east in the bike lane on Evelyn Ave and the light was green as I turned right," she wrote.  "I was signaling left and waiting for oncoming traffic to pass when this man began incessantly honking at me, calling me a b*tch, and telling me to get out of his way. I was attempting to make a left the way the California DMV recommends ."

In the video Nuguid asked the man why he was honking at her and calling her a bitch while explaining to him that she was making a legal turn.

Rolling up to his window, she said, "How f*cking dare you, you entitled white prick?"

Nuguid noted, "I can tell you're not from California," to which the man responded, "You f*cking Cambodian n*gger, get out of here."

"Excuse me, this is going to be on Facebook," Nuguid replied.

The man -- sporting a big grin -- sarcastically responded "Awesome," over and over again before driving off.

Speaking with Raw Story, Ms. Nuguid said that this is not the first time that she has been racially harassed by a white man while riding on her bike - but that "Cambodian n*gger"was a new one to her.

She also explained that she and her daughter cried a bit after the encounter and that she has already had to talk with her children about the racism that they will encounter. She also pointed out that she was surprised at the vitriol some are already spewing at her online  -- some of which she reposted (see below).

On the only day of Sunday voting before Georgia’s U.S. Senate runoff, the auto parts store parking lot across the street from Atlanta’s Metropolitan Library looked and sounded more like a block party than a get-out-and-vote event.

“We’re having a good time on this corner. If you feel the spirit, let me hear your horn. Come on!” bellowed D.J. Concrete Kash above a sound system that played gospel music and was next to several orange shade tents filled with free food, water, hand warmers and voter guides.

On Monday, POLITICO reported that House Democrats are adopting a "welcome to hell" attitude toward the incoming razor-thing Republican majority — and, after two years of struggling to hold together a narrow majority themselves, are eager to watch House Minority Leader Kevin McCarthy (R-CA), the favorite to be tapped Speaker, fight to do the same against bitter internal party disagreements.

"House Minority Leader Kevin McCarthy and his team are set to take over in January with the kind of margins that vexed Speaker Nancy Pelosi, but lacking the two decades of experience she brought to the task," reported Sarah Ferris. "And the House GOP will have to steer legislation through with as few as four votes to spare while its leaders deal with an emboldened Freedom Caucus, internal finger-pointing over a disappointing midterm cycle, and a looming brawl over a 2024 presidential primary that features Donald Trump back in the mix."

According to reporting from the Guardian's Hugo Lowell, Donald Trump has no immediate plans to condemn white nationalist Nick Fuentes as part of an effort to douse the firestorm he created after having dinner at Mar-a-Lago with the infamous anti-Semite and Holocaust denier.

While some Trump allies have fanned out to try explain away the dinner meeting by saying the former president didn't know who he was sitting down with -- which is itself a questionable claim -- Trump himself is reportedly refusing to go on the record and admit that he was wrong despite pleas from allies and aides.