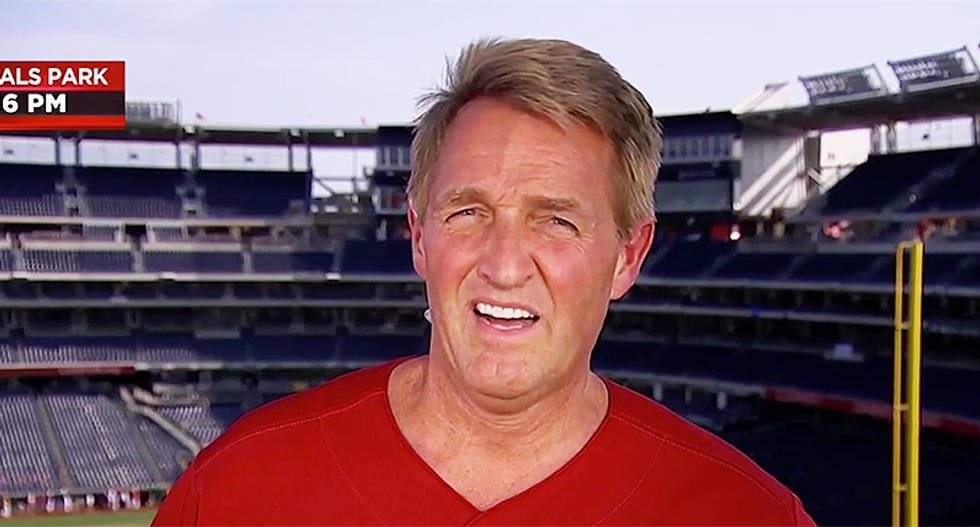 Rep. Jake Flake (R-AZ) told MSNBC's Chuck Todd that Democrats are not the only ones to blame for so-called "toxic rhetoric" his party has been quick to blame on liberals.

“We’ve got to lead by example, frankly, we got to do the same, tone down the rhetoric and the language that we use, and I do hope the president will do the same,” Flake said.

Flake's comments come just 24 hours after his colleague Rep. Chris Collins (R-NY) told reporters that Democrats are responsible for incidents like the shooting in Alexandria, Virginia Wednesday. He argued that they're so filled with "angst" and "anger" that it provokes people. He was then inundated with examples of Republicans using threatening and harsh behavior for the past nine years about former President Barack Obama.

While President Donald Trump's response to the shooting was a calm measured one, the GOP call for unity ended when the president spent his afternoon railing against former Secretary Hillary Clinton.

“We saw a campaign where on all sides it was frankly pretty ugly,” Flake continued. “And we’ve got to change it.”

He went on to say that he believes both sides must refrain from "ascribing the worst motives to our opponents, and debate ideas.”

Todd asked for specifics for how Trump could lead. Flake acknowledged that Trump's rhetoric could be toned down and that he's in a unique position to set a standard and lead by example.

“Well, there’s things that he could stop doing, you know, referring to others in the other party as losers, and using language that isn’t becoming,” Flake said.