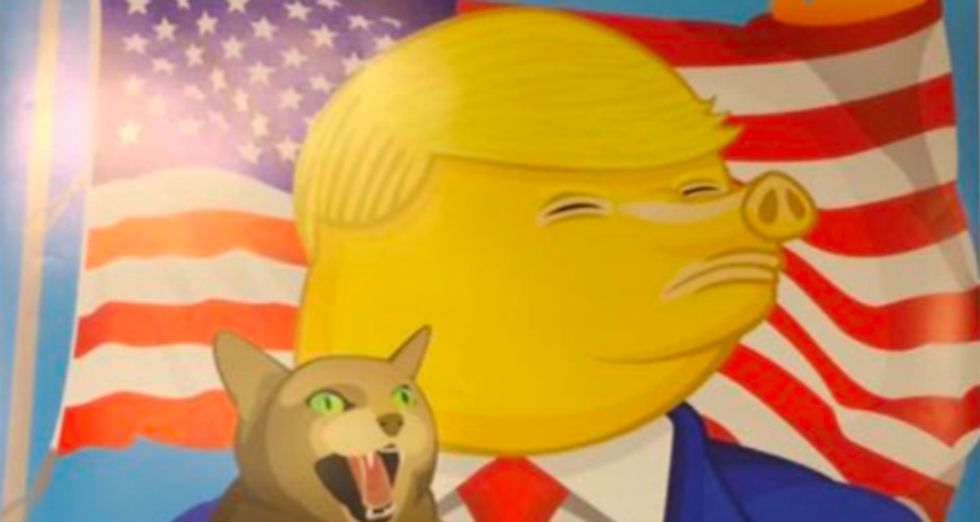 Saying, "other people weren’t too happy with this," a New Jersey high school principal removed two works of art from a high school art exhibit that did not show President Donald Trump in a flattering light.

According to the MorristownGreen, Liam Shea -- a junior at Morristown High -- claims he was called into the principal's office on Thursday and told his painting portraying a pig-faced Trump holding a cat before a burning American flag had to be removed.

"First he said, ‘I appreciate the risk you took, and it’s very well done," Shea explained, but said the principal added, "... other people weren’t too happy with this.'”

Along with Shea's pig-faced Trump, another student's painting of Trump taking a selfie while seated on a missile was also removed.

The mother of the high school junior excoriated the school authorities for bowing to pressure, saying, “To me, that’s what art is for, especially for political things."

"That’s how people express to the world how they feel about what’s going on…I don’t think the image is offensive. I think it’s clever,” Kelly Shea explained.

As for her son, he's happy for the publicity saying if it wasn't taken down no one would know about his artistic abilities and it might help him pay for college.

“A dozen people told me to make a t-shirt,” Shea said. “I could be paying for my college tuition.”

The schools response to Shea's artwork stand in direct contrast to an 11-year-old Maryland student who received a perfect score on an illustration of a GOP elephant pooping on President Trump's head.

You can see a picture of Shea's entire painting here at the MorristownGreen.