'I assume because they finally watched themselves': Colbert explains why Fox dropped slogan 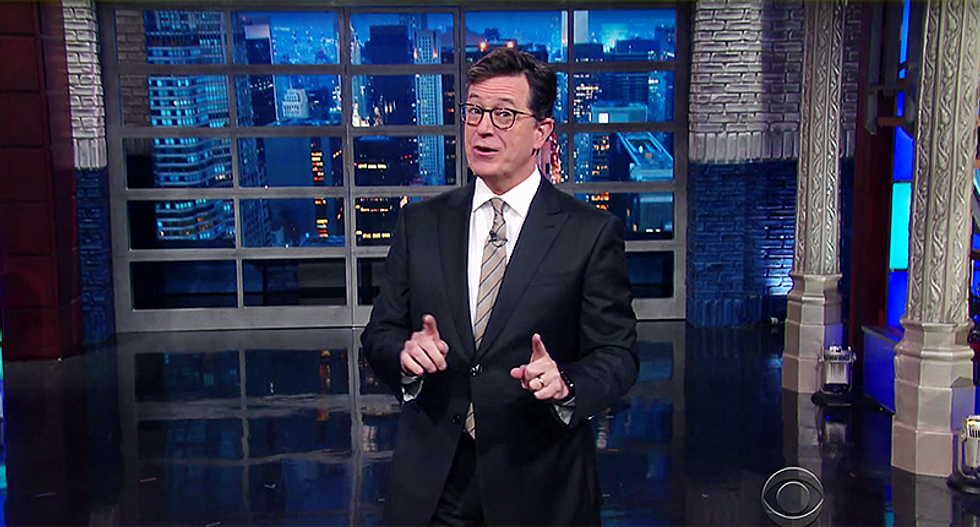 Comedian Stephen Colbert found it tragic when Fox News announced this week that it will be changing their "Fair and Balanced" slogan.

"I assume because they finally watched themselves," Colbert joked on Thursday's "Late Show."

He went on to come up with a few of the other Fox News slogans he claimed that the network was considering: "CNN for your crazy uncle," "Thanks for watching Mr. President" and "You'd be prettier if you smiled more."

Colbert also remarked that they missed the news last night that special counsel Robert Mueller was investigating Trump for obstruction of justice. He explained that the show tapes earlier and they had just finished taping when the news broke.

"Well, it looks like Trump is going to have to change that hat to 'Make Justice Obstructed Again,'" Colbert joked. He noted that Mueller is not kidding around about the investigation and has hired what is being called an "all-star legal team."

"Yeah! Mueller is like Batman putting together The Flash, Green Lantern and Wonder Woman to create The Obstruction of Justice League," Colbert said, showing off his faux movie cover.

Colbert reported that Mueller has hired at least three people who have donated to Democrats in the past and that he should be hiring people with no political connections. One Trump supporter even said that Mueller "has to have a staff of virgins."

"Which is what Trump originally wanted and how he ended up with Reince Priebus.” Colbert joked.

Watch the full stand-up below:

'I assume because they finally watched... by sarahburris

The former Seminole County, Fla. tax collector admitted to six criminal counts in a case that led to an investigation of Gaetz for alleged sex trafficking.

According to ABC7 News, a JetBlue flight from New York to San Francisco was forced to divert to Minneapolis after an anti-masker onboard snorted a "white substance," touched a woman, and caused a number of disturbances.

"Witnesses say that passenger had a bag full of that white substance, touched at least one other woman, made inappropriate comments to numerous female passengers, yelled racist slurs towards passengers upon boarding, and refused to wear a mask," reported J.R. Stone. "In a video taken by a passenger, those with JetBlue explained that they had to move one female passenger away from the man. Upon landing in Minneapolis witnesses we talked with say the man in question was met by officers and the FBI."

A hospital in Uttar Pradesh, India's most populous state, is being charged under the country's National Security Act for sounding the alarm over a lack of oxygen that resulted in Covid deaths. The hospital's owner and manager says the police have accused him of "false scare-mongering," after he stated publicly that four of his patients died on a single day when oxygen ran out.

Since Covid-19 exploded in India, the prime minister, Narendra Modi, seems more intent on controlling the news than the outbreak. On Wednesday, India recorded nearly 363,000 Covid cases and 4,120 deaths, about 30 percent of worldwide Covid deaths that day. But experts say India is vastly understating the true number. Ashish Jha, dean of Brown University's School of Public Health, estimates that at least 25,000 Indians are dying from Covid each day.