'I thought my son was going to die': Colorado infant overheats while delayed on sweltering United jet 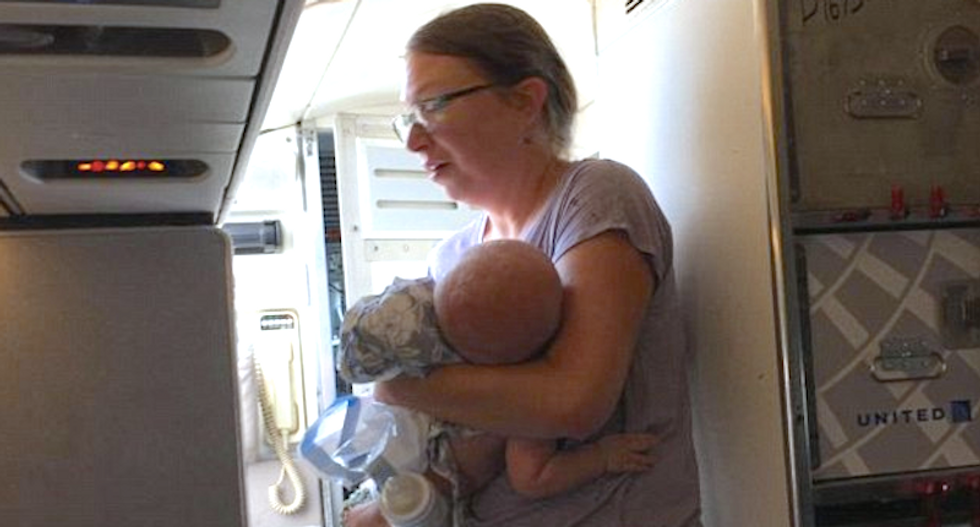 An infant became overheated on a delayed United Airlines flight that sat for hours on a tarmac in Denver -- where temperatures soared above 90 degrees.

The baby was traveling with his mother, Emily France, from Colorado to El Paso to join her astrophysicist husband for a rocket launch, but bad weather along the scheduled flight path prevented their flight from leaving on time, reported the Denver Post.

The 39-year-old France said her son, Owen, became overheated as they waited nearly two hours to depart in the sweltering plane while crew added more fuel to take an alternate route.

"There was just hot air coming from the vents," said France, who boarded the plane at 1:20 p.m., ahead of many other passengers, and took a seat in the rear of the aircraft.

She applied wet wipes to the 4-month-old's neck and down his shirt to cool the baby, and flight attendants brought ice in garbage bags to cool the child as his body became hotter.

“His whole body flashed red, and his eyes rolled back in his head and he was screaming,” France told the newspaper. “And then he went limp in my arms. It was the worst moment of my life.”

France and other passengers begged for an ambulance, and she watched as the flight crew appeared to argue over whether stairs could be pushed to the plane or whether it should return to the gate.

“They were not equipped to handle it,” France said. “They couldn’t evacuate us. It was chaos. I really thought my son was going to die in my arms.”

Owen drifted in and out of consciousness as she waited nearly 30 minutes after the ambulance was finally called and the plane returned to the gate, the Post reported.

He was taken to a nearby hospital, where he was treated and released, and doctors found no underlying medical issues.

“No one from the airline has called to see if my son is OK,” France said. “It can’t be that often infants are evacuated by ambulances from their airplanes. You’d think it would be on somebody’s desk.”

"This should never have happened," said an airline representative. "We are profoundly sorry to our customer and her child for the experience they endured. We are actively looking into what happened to prevent this from occurring again. The pilot returned to the gate as our crew called for paramedics to meet the aircraft. Medical care was provided to the child within 16 minutes of the Captain’s call for paramedics."

Current regulations require airlines to provide bathroom breaks, drinks and food if passengers wait more than two hours on a tarmac, and passengers must be allowed to exit the plane after three hours.

France, who waited about two hours with her son on the hot plane, told the newspaper a new rule should be put in place.

“If the temperature in the plane gets above a certain level, passengers should be taken off immediately,” she said.