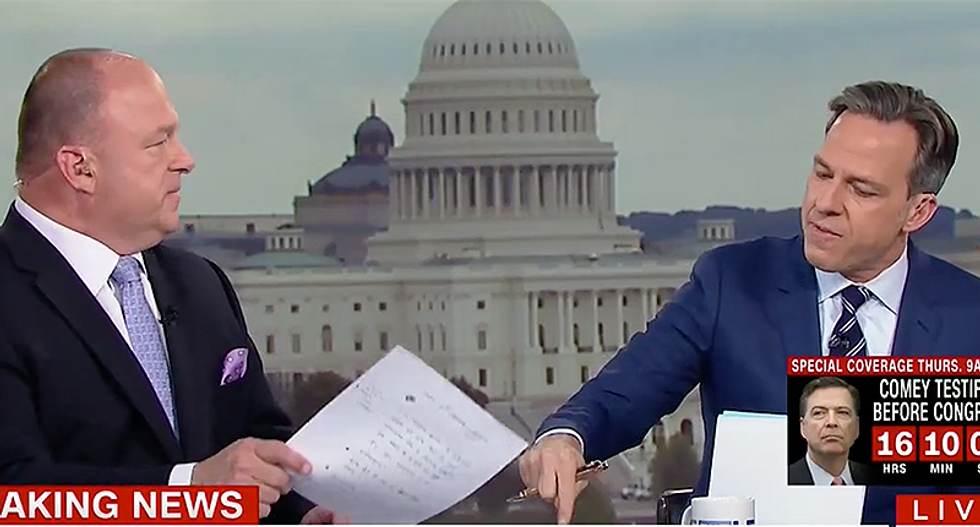 CNN's Jake Tapper wouldn't let an ally of President Donald Trump get away with dismissing the unorthodox meetings in private with former FBI Director James Comey.

"Can I just say, this is one thing that went through my head, and this maybe shows that I've been in Washington too long, but the idea that President Trump had dinner with the FBI director," Tapper said, noting that it was just the two men at dinner and in the Oval Office.

"Where is the president's staff?" Tapper asked. "I don't know any staffer in Washington, D.C. that would -- I've gone to lunches with senators, and the senator is not by themself and we're not doing anything untoward and we're just talking."

David Urban of The American Continental Group and a former Trump booster explained that Trump's staff was "lingering outside the door."

"The chief of staff pops his head in. The president says I'll be out in a second," Urban continued.

"But he's not supposed to pop his head in," Tapper cut in. "The chief of staff is supposed to be there to make sure the president doesn't do anything--"

"The president said 'I would like a second with the director by himself.' The meeting is wrapping up," Urban said.

"What about the dinner?" Tapper wondered.

"The dinner -- plenty of people have dinner in this town by themselves," was Urban's only excuse.

"There wasn't an active investigation at the time," Democratic strategist Hilary Rosen noted. "This particular issue that you're raising, Jake, all the reporting is showing that the president are having a hard time finding a reputable lawyer in Washington, D.C. to actually take on this criminal probe because they do not believe the president will be a good client, that he does not act, that he's not responding well to what are really legal vagaries here."