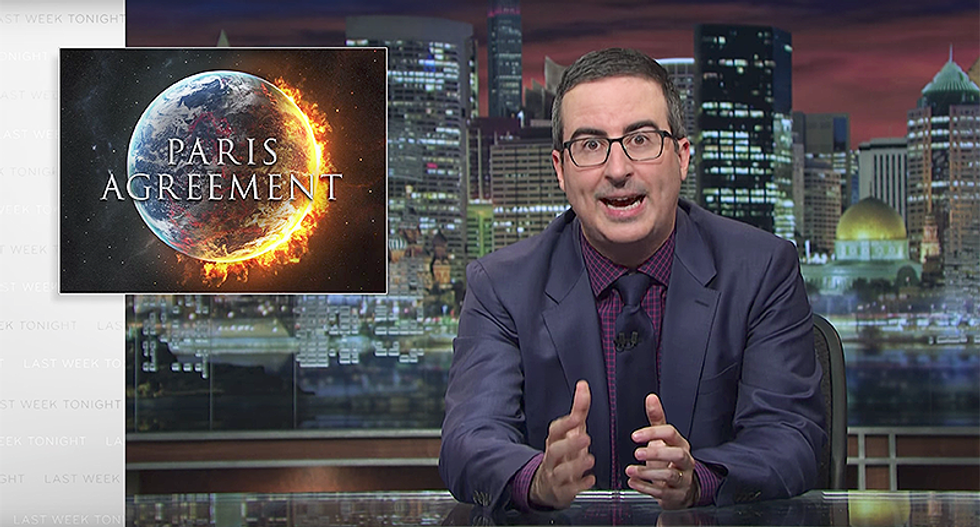 John Oliver was disgusted by President Donald Trump's decision to pull out of the Paris Climate Accord last week. After a touching tribute to the U.K. following the recent London Bridge terrorist attacks, Oliver blasted Trump for a "flamboyantly deceptive" speech withdrawing from the accord.

It wasn't surprising to see Trump pull out of the accord, according to Oliver. On the whole, the agreement was so "off-brand" for the president that Oliver said it might as well be known as "a light jog." However, the decision will continue to have serious implications for more than just the U.S. particularly when it comes to the water supply.

“We are not talking about a fictional apocalypse like the one in the movie 2012, but a real global disaster like the movie '2012,'” explained Oliver.

Oliver walked through Trump's remarks, calling out every single falsehood and fact-checking the remarks. Specifically, Trump claimed that the U.S. would be at an "economic disadvantage" under the agreement, a claim many, including Oliver, have argued is false.

“What are you talking about?” Oliver said. “They were happy because they secured a landmark victory for the future of the planet, you f*cking egomaniac. The entire world is not secretly conspiring against the United States. The only thing the whole world is secretly conspiring to do is convince everyone that there are two Olsen twins.”

“Trump’s description of the agreement is so flamboyantly deceptive it would be equally accurate to say compliance with the Paris agreement would likely require all ducks to wear jean shorts,” said Oliver. “And it could cost each American five fish and a dump truck full of hamsters."

He went on to call Trump's "ludicrous misunderstanding" of the agreement and said that it was reckless to cut and run. Trump continues to believe that the accord would be bad for business and for the coal industry, but Oliver explained that the accord doesn't even mention coal. It leaves it for each country to set its own climate goals voluntarily.

Even the Party of Reason and Progress weighed in on the way the administration in treating science. In an open letter to the president days before he was sworn in, they advised: "we hope to see rational, factually sound measures and decisions from your office, and if we do, we will support their implementation."

"However, much of your campaign has thus far been founded upon advocating for policies which in many instances run contrary to established scientific fact," the PORP explained. Unfortunately, reason and progress seem all too precious commodities in Trumpland and as Oliver concludes the president seems to want to raise the tax on them.

There is one silver lining, however. Governors, mayors, states and corporations throughout the U.S. are beginning to step up to slow climate change in the absence of an American leader. Even Philip Morris is answering the call.

“It just feels inherently surprising,” said Oliver. “It’s like I just said, good news everyone: Ebola, ISIS, and that dentist who shot Cecil the Lion are gonna save the planet for us.”

Watch the whole video below: