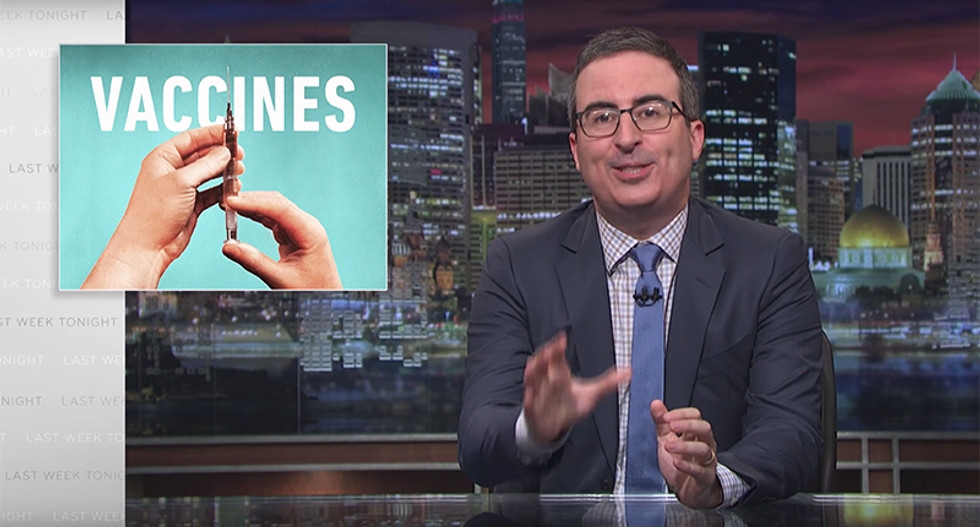 Oliver and his wife welcomed their first child in late 2015 and he noted that in modern times "vaccines work," yet, people don't bother posting Facebook status updates like "I didn't get polio again today!" Still, some parents are asking whether they should vaccinate their children, whether they should eat the placenta or let their kids cry. He answered simply, "yes, no and yes."

"I kind of get why vaccines creep people out," the new father admitted. "Vaccination can mean getting injected by a needle filled with science juice. Although, pretty much every medical practice sounds terrifying when you break it down like that. An appendectomy means removing one of your organs through stabbery. Antibiotics are poisons used to murder things living in you. And even exercise means forcibly burning up your insides. My point is, the human body is a true carnival of horrors and frankly, I'm embarrassed to have one."

He called out the rise of preventable diseases like measles that are back on the rise, yet, despite the evidence, some parents believe the MMR vaccine causes autism. "This atmosphere of confusion about vaccines has caused real problems," he said, referring to a measles outbreak in Minnesota. Some parents have even taken to deliberately infecting their children with diseases with pus-filled clothing and used lollipops.

The only doctor to say that there was a link turned out to be "the Lance Armstrong of doctors." Dr. Andrew Wakefield went on to lose his license for his thoroughly discredited "study" that vaccines cause autism. Any parent that believes their child was "given" autism through a vaccine, which banned the practice of using mercury, hasn't been paying attention to the FDA, which outlawed the practice of using mercury in any kind of infant vaccine.

Still, 93 percent of pediatricians have been asked to "spread out" vaccines, even though the Center for Disease Control says doing so puts kids at risk. It's the "middle ground" between something sensible and something insane. Which, Oliver said was like acknowledging that eating a whole bar of soap was a bad idea, so you'll just eat half. Today, kids are indeed getting more shots, but they're being given fewer antigens, which can induce an immune response in the body the way some flu vaccines do.

Despite his child being born prematurely, Oliver said that he vaccinated his son. On a personal note, Oliver said, "Children are f*cking disgusting."

While vaccines have saved millions and millions of lives, for some reason "small groups are both skeptical and vocal about vaccines, which is nothing new, but these days their voice has been amplified by the human megaphone that is the president of the United States."

He played a clip of Trump during the 2016 campaign debates saying that the shot they give to children looks like one they'd give to a horse - holding his hands out to approximately the size of a loaf of bread.

“So what’s going on with autism?” Trump asked a teacher in the audience of a separate event. “When you look at the tremendous increase, it’s really — it’s such an incredible — it’s really a horrible thing to watch, the tremendous amount of increase.”

Oliver urged people not to take any kind of health care advice from Trump, considering what his personal physician looks like.

"Now the good news is," Oliver began again. "These days, very few people will say they are completely anti-vaccine. Instead, like the president, they'll say, 'I'm not anti-vaccine, but...' — and it's what comes after that 'but' that week need to look at."

"I honestly know for some people this is still hard, but what can help is to try and anchor yourself to what we know to be true about the risks of vaccines," he said. He went on to say that parents should think more about the benefits of the vaccine than inaccurate memes on Facebook.

In the end, not vaccinating children ends up hurting kids who can't be vaccinated because they're sick. Oliver gave an example of one young boy who has leukemia and relies on "herd immunity." Oliver used a fake quote from Jesus Christ to illustrate his point: "Don't be a di*k."