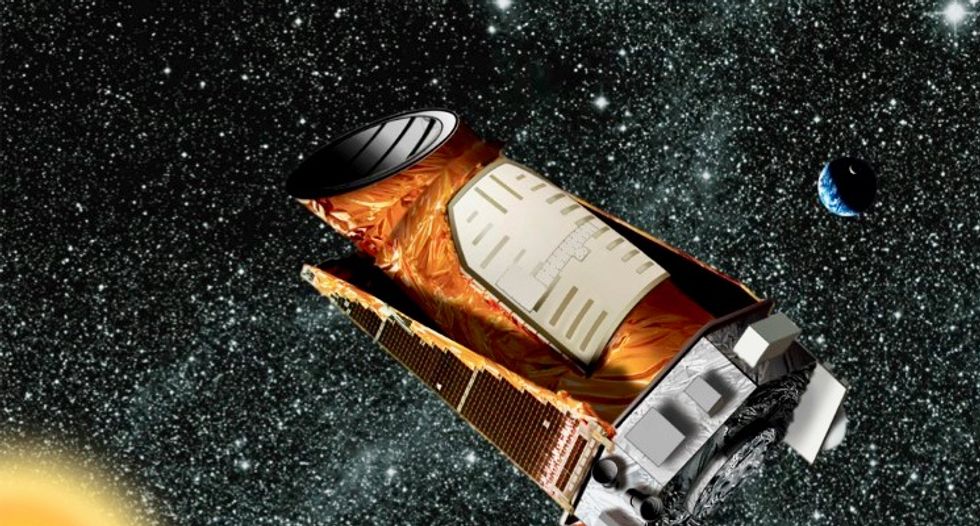 FILE PHOTO: An artist's composite of the Kepler telescope is seen in this undated NASA handout image. REUTERS/NASA/Handout/File Photo via Reuters

Astronomers on Monday added 219 candidates to the growing list of planets beyond the solar system, 10 of which may be about the same size and temperature as Earth, boosting the chances for life.

Scientists found the planet candidates in a final batch of NASA's Kepler Space Telescope observations of 200,000 sample stars in the constellation Cygnus.

The candidates include 10 newly discovered rocky worlds that are properly distanced from their parent stars for water, if it exists, to pool on their surfaces. Scientists believe liquid water is a key ingredient for life.

“An important question for us is, ‘Are we alone?'" Kepler program scientist Mario Perez said in a conference call with reporters. “Maybe Kepler today is telling us indirectly ... that we are not alone.”

The National Aeronautics and Space Administration launched the Kepler telescope in 2009 to learn if Earth-like planets are common or rare. With the final analysis of Kepler data in hand, scientists said they will now work on answering that question, a key step in assessing the chance that life exists beyond Earth.

During a four-year mission, Kepler found 2,335 confirmed planets and another 1,699 candidates, bringing its tally to 4,034. That number includes about 50 worlds that may be about the same size and temperature as Earth.

Including other telescope surveys, scientists have confirmed the existence of nearly 3,500 planets beyond the solar system.

Kepler’s data also provided a new way to assess whether a planet has a solid surface, like Earth, or is made mostly of gas, like Neptune. The distinction will help scientists home in on potential Earth-like planets and better the odds for finding life.

“It’s like finding what we thought was a single species of animal is really two different things,” said Benjamin Fulton, a graduate student in astronomy who analyzed the Kepler data.

So far, these planets, which scientists refer to as “super-Earths” and “mini-Neptunes,” have not been found in Earth’s solar system, though scientists are on the hunt for a potential ninth planet far beyond Pluto.

“It is interesting that we don’t have what appears to be the most common type of planet in the galaxy,” Fulton said.