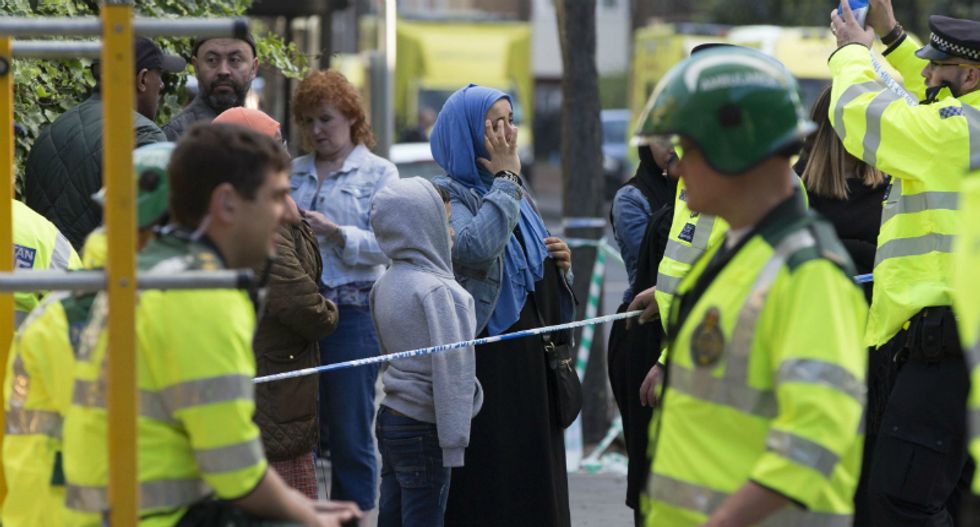 Mourners and security people outside of the Grenfell Towers fire in London (via PA).

According to Fusion, some of the first people to alert residents and authorities to the Grenfell Towers fire in London on Wednesday morning were Muslims awake early for their pre-dawn Ramadan meal.

Though it’s unclear who was first to notice the fire, Fusion reported that many Muslims who woke up before dawn to eat before fasting during daylight for Ramadan noticed the flames coming from the bottom floor of the building.

According to an unidentified Londoner who spoke to HuffPost UK, Muslims were leaving mosques for their early morning prayers to alert people to the fire.

"Muslim boys saved people’s lives. They ran around knocking on people’s doors. If it wasn’t for all these Muslims boys round here helping us, coming from mosques, people would have [died]...they were the first people with bags of water, giving to people. Helping people," she told HuffPost. "Thank God for Ramadan."

According to Zeinab Jafari, a London resident who lives near the towers, the fire either didn't set off fire alarms, or the alarms were very faint.

"There was no warning, nothing, nobody knew. People were sleeping while the building was on fire," she told BuzzFeed News. "I heard fire engines but we didn’t hear any fire alarms."

A reported 12 people have died so far in the fires or from injuries sustained during the blaze.

Watch reports about the Muslim first responders to the Grenfell fire below via the U.K.'s SkyNews.