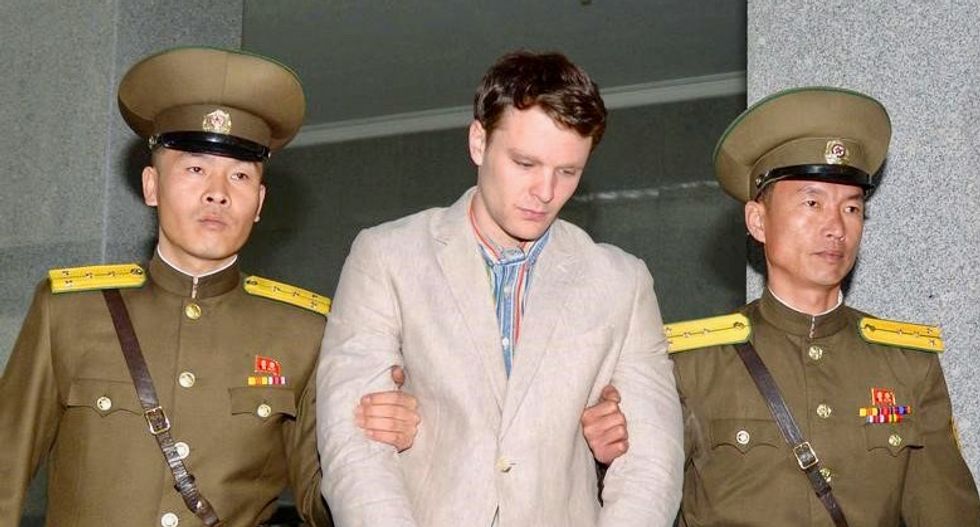 North Korea said on Friday the death of U.S. university student Otto Warmbier soon after his return home was a mystery and dismissed accusations that he had died because of torture and beating during his captivity as "groundless".

The North's foreign ministry spokesman said Warmbier was "a victim of the policy of strategic patience" of former U.S. President Barack Obama whose government never requested his release, according to comments carried by the official KCNA agency.

"The fact that Warmbier died suddenly in less than a week just after his return to the U.S. ... is a mystery to us as well," KCNA quoted the spokesman as saying.

Warmbier, 22, was arrested while visiting the reclusive country as a tourist. He was sentenced to 15 years of hard labor for trying to steal an item bearing a propaganda slogan from his hotel, North Korean state media said.

He was sent home last week suffering from brain damage and in what U.S. doctors called a state of unresponsive wakefulness.. He died on Monday.

His death fanned a conflict between the North and the United States that was already aggravated by North Korea's defiant missile launches and two nuclear tests since early last year as part of its effort to build a nuclear-tipped intercontinental ballistic missile (ICBM) capable of hitting the U.S. mainland.

A U.S. official said on Thursday that North Korea had conducted another test of a rocket engine believed to be linked to Pyongyang's ICBM program.

U.S. President Donald Trump blamed "the brutality of the North Korean regime" for Warmbier's death. South Korean President Moon Jae-in, who had advocated talks with the North, said Pyongyang had a "heavy responsibility" in the events leading up to the University of Virginia student's death.

The North's unnamed ministry spokesman said that such accusations were part of a smear campaign to slander the country that had given "medical treatments and care with all sincerity" to a person who was "clearly a criminal".

U.S. doctors who traveled to the North last week to bring Warmbier home recognized that the North had provided him with medical treatment, the spokesman said. "To make it clear, we are the biggest victim of this incident."

North Korea accepted repeated requests from the present U.S. administration, the spokesman said, and repatriated the student on humanitarian grounds "in consideration of his bad health."

The exact cause of Warmbier's death remains unclear. Officials at the University of Cincinnati Medical Center, where he was treated after his return, declined to provide details. His family asked the local coroner not to perform an autopsy.

Thousands of friends and relatives gathered at Wyoming High School in suburban Cincinnati on Thursday for a memorial service for Warmbier, who graduated from the school as salutatorian in 2013.

After returning from a five-day trip to North Korea on June 17, former National Basketball Association star Dennis Rodman suggested on Friday that his visit may have had something to do with Pyonyang's decision to send the student home.

Rodman, who has faced ridicule and criticism for visiting North Korea in the past, has said he was trying to bring sports to the increasingly isolated country.

"I was just so happy to see the kid released," Rodman told ABC News in an interview. "Some good things came of this trip."