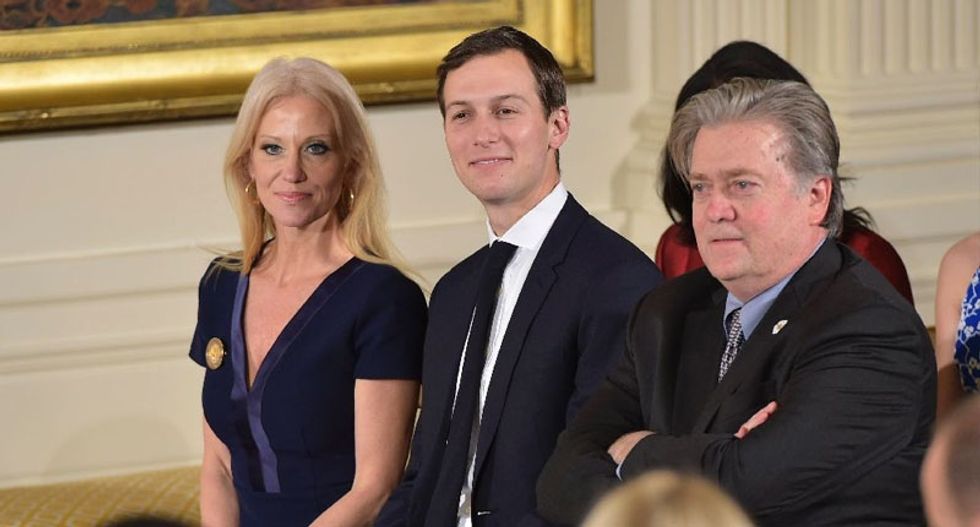 A new Washington Post report details the impressive rise of the "shadow" universe of non-profits that may have contributed to President Donald Trump's election. At the heart of it: the David Horowitz Freedom Center, a right-wing nonprofit whose founder was a former leftist whose work, among other things, spawned the George Soros-funded "paid protester" conspiracy.

The Post report goes to great length to describe the historical rise of the Freedom Center, from its' beginnings as a tax-exempt non-profit to a self-described "battle tank" and "school for political warfare." Among the Freedom Center's core tenets are the ideas that immigrants are destroying America, that Islam in particular needs to be stamped out and that climate change is a leftist "ruse." According to Horowitz himself, the Freedom Center operates as a "shadow political universe."

A self-described "red diaper baby" raised by communists, the Berkeley-educated Horowitz began moving right when he penned a "coming out" editorial titled "Lefties for Reagan." According to the Post's Robert O'Harrow Jr. and Shawn Boburg, it was Horowitz's organization that gave influential White House adviser Stephen Miller his start -- the two became connected shortly after the attacks on September 11, 2001 when Miller wrote to Horowitz accusing his school of a lack of patriotism. Their relationship offered Miller opportunities throughout college and as a post-grad Capitol Hill operative, when Horowitz introduced Miller to his soon-to-be employer Sen. Jeff Sessions (R-AL).

Along with considering Miller a "protegee," Horowitz's organization also played a role in propelling former Breitbart executive and current Trump adviser Steve Bannon from banker-turned-filmmaker to the White House. It was at the Citizens United Film Festival hosted by Horowitz that Bannon got his start -- and at a book signing at Bannon's home in 2013 when he infamously told conservative thinker Ronald Radosh that he is a "Leninst" who wants "to bring everything crashing down, and destroy all of today’s establishment."

In tandem with Breitbart, the Post report continued, Horowitz's Freedom Center began publishing fake news articles about then-Democratic frontrunner Hillary Clinton as the 2016 presidential race went into full tilt in 2015. By then, the report noted, "the Freedom Center barely resembled the charity the IRS had approved for tax exemption," and was at this point "openly involved in fighting a political war with the left."

After Trump won the election, Horowitz was quoted congratulating himself for getting so many of his people involved in the soon-to-be-president's administration, including Miller, Bannon, Sessions, Vice President Mike Pence, adviser Reince Priebus and former campaign manager Kellyanne Conway.

"It’s quite an impressive list,” Horowitz said. "The center has a big stake in this administration."

Read the entire report on the "shadow" organizations led by the David Horowitz Freedom Center via the Post.