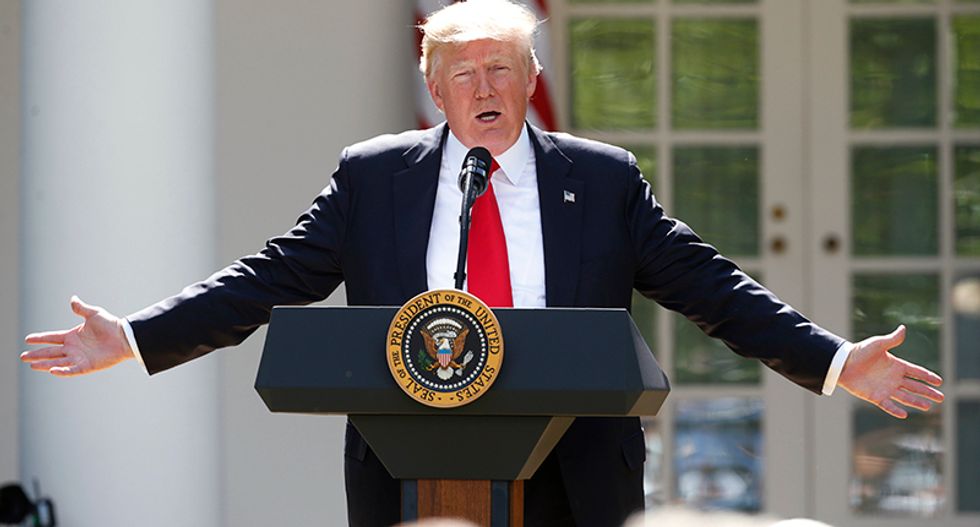 U.S. President Donald Trump announces his decision that the United States will withdraw from the landmark Paris Climate Agreement, in the Rose Garden of the White House in Washington, U.S., June 1, 2017. REUTERS/Kevin Lamarque

Massachusetts Institute of Technology officials said U.S. President Donald Trump badly misunderstood their research when he cited it on Thursday to justify withdrawing the United States from the Paris Climate Agreement.

Trump announced during a speech at the White House Rose Garden that he had decided to pull out of the landmark climate deal, in part because it would not reduce global temperatures fast enough to have a significant impact.

"Even if the Paris Agreement were implemented in full, with total compliance from all nations, it is estimated it would only produce a two-tenths of one degree Celsius reduction in global temperature by the year 2100," Trump said.

That claim was attributed to research conducted by MIT, according to White House documents seen by Reuters. The Cambridge, Massaschusetts-based research university published a study in April 2016 titled "How much of a difference will the Paris Agreement make?" showing that if countries abided by their pledges in the deal, global warming would slow by between 0.6 degree and 1.1 degrees Celsius by 2100.

"We certainly do not support the withdrawal of the U.S. from the Paris agreement," said Erwan Monier, a lead researcher at the MIT Joint Program on the Science and Policy of Global Change, and one of the study's authors.

"If we don't do anything, we might shoot over 5 degrees or more and that would be catastrophic," said John Reilly, the co-director of the program, adding that MIT's scientists had had no contact with the White House and were not offered a chance to explain their work.

The Paris accord, reached by nearly 200 countries in 2015, was meant to limit global warming to 2 degrees or less by 2100, mainly through country pledges to cut carbon dioxide and other emissions from the burning of fossil fuels.

Under the pact, the United States - the world's second biggest carbon emitter behind China - had committed to reduce its emissions by 26 percent to 28 percent from 2005 levels by 2025.

A senior administration official defended Trump's use of the findings. "It's not just MIT. I think there is a consensus, not only in the environmental community, but elsewhere that the Paris agreement in and of itself will have a negligible impact on climate," the official told reporters at a briefing.

The dispute is the latest round of a years-long battle between scientists and politicians over how to interpret facts about the effects of burning fossil fuels on the global climate, and translate them into policy.

Trump has repeatedly cast doubt on the science of climate change and once called it a hoax perpetrated by China to weaken U.S. business.