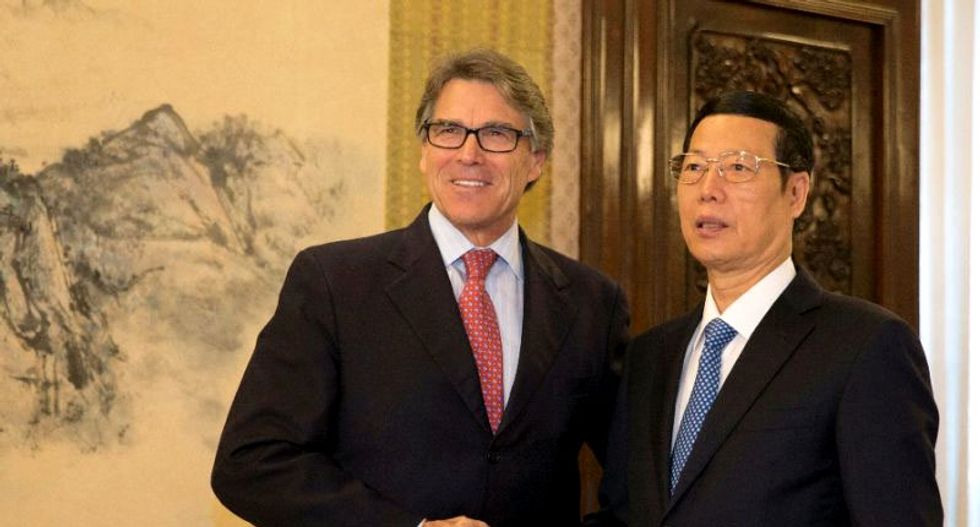 US Energy Secretary Rick Perry called for Sino-US cooperation on clean energy during a visit to Beijing Thursday, a week after President Donald Trump's much-criticised withdrawal from the Paris climate pact.

Trump's decision has jolted the international community and could put China, the world's top carbon emitter, in a position to fill the leadership void on curbing global warming.

But Perry said the United States was still eager to work with China on developing clean energy technology such as liquefied natural gas, clean coal and nuclear power.

"We have extraordinary opportunities to be partners to work on clean energy issues," Perry said during a meeting with China's number seven, Zhang Gaoli, on the sidelines of a ministerial-level clean energy meeting in Beijing.

The relatively low-level reception was a contrast to the red carpet Beijing rolled out for California governor Jerry Brown earlier this week.

Brown met for almost an hour with Chinese President Xi Jinping and they signed a memorandum of understanding on developing clean energy.

Brown has vowed to step into the vacuum left by Trump's exit from the Paris accords, and has mounted a vigorous PR campaign on behalf of his state's leadership on environmental issues during his week long tour of China.

Beijing has said it will stick with the agreement despite the US withdrawal and is seeking to reach out to American states that share its determination.

California, which has the world's sixth-largest economy, is one of a handful of American states that have pledged to continue fighting climate change regardless of action at the federal level.

The state -- which has some of the worst air pollution in the country -- has dramatically slashed its harmful emissions in the last decade.

Before setting off for China, Brown pledged California would resist Trump's decision to abandon the Paris deal, describing the move as "misguided and insane".