Sessions angers Democrats with refusal to testify on Trump conversations 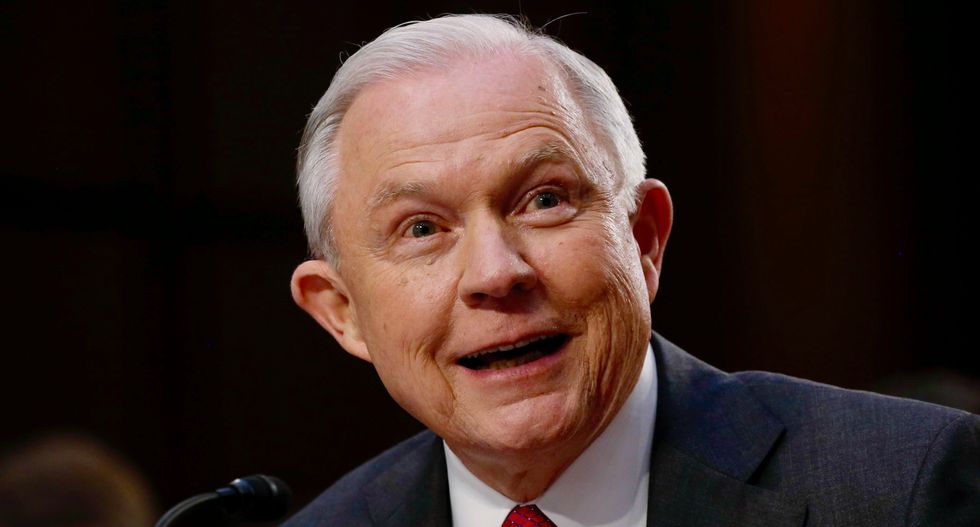 U.S. Attorney General Jeff Sessions on Tuesday denounced as a "detestable lie" the idea that he colluded with Russian meddling in the 2016 presidential campaign, and he clashed with Democratic lawmakers over his refusal to detail his conversations with President Donald Trump.

Sessions, a senior member of the Republican Trump's Cabinet and an adviser to his presidential campaign, had a series of tense exchanges with Democrats on the Senate Intelligence Committee during about 2-1/2 hours of high-stakes testimony as they pressed him to recount conversations with the president.

"You raised your right hand here today and said you would solemnly swear to tell the truth, the whole truth and nothing but the truth," Democratic Senator Martin Heinrich said. "Now you're not answering questions. You're impeding this investigation."

Sessions refused to say whether he had discussed FBI director James Comey's handling of the FBI's Russia probe with Trump before the president fired Comey on May 9. Similarly, he did not answer whether Trump had expressed concern to Sessions about the attorney general's March decision to recuse himself from the Russia investigation. Sessions previously offered to resign because of tensions with Trump over his recusal decision.

Sessions also refused to answer whether any Justice Department officials had discussed possible presidential pardons of individuals being looked at in the Russian investigations.

Russia has denied repeatedly that it interfered in the U.S. election, and Trump has denied any collusion by his campaign with Moscow.

Democratic Senator Ron Wyden told Sessions, "I believe the American people have had it with stonewalling. Americans don't want to hear that answers to relevant questions are privileged."

"I am not stonewalling," Sessions replied. Sessions said he was following Justice Department policy and would not discuss confidential communications with the president.

Executive privilege is a power that can be claimed by a president or senior executive branch officials to withhold information from Congress or the courts to protect the executive branch decision-making process.

"It is my judgment that it would be inappropriate for me to answer and reveal private conversations with the president when he has not had a full opportunity to review the questions and to make a decision on whether or not to approve such an answer," Sessions said.

The committee's Republican chairman, Richard Burr, asked Sessions to ask the White House if there were areas officials there would be comfortable with him answering and provide written answers if so.

U.S. intelligence agencies concluded in a report released in January that Russian President Vladimir Putin ordered an effort to interfere in the election to help Trump in part by hacking and releasing damaging emails about Democratic candidate Hillary Clinton.

The testimony by Sessions marked the latest chapter in a saga that has dogged Trump's first five months as president and distracted from his domestic policy agenda including major healthcare and tax cut initiatives.

"I have never met with or had any conversation with any Russians or any foreign officials concerning any type of interference with any campaign or election in the United States. Further, I have no knowledge of any such conversations by anyone connected with the Trump campaign," Sessions said.

"The suggestion that I participated in any collusion or that I was aware of any collusion with the Russian government to hurt this country, which I have served with honor for over 35 years, or to undermine the integrity of our democratic process, is an appalling and detestable lie," he said.

Sessions is the most senior member of Trump's administration caught up in the Russia controversy.

In his opening remarks, Sessions said he knew of no conversations between Trump campaign individuals and Russian officials about interfering in the U.S. election. But under questioning, Sessions acknowledged that Trump's campaign foreign policy advisers "never functioned as a coherent team" and there were members of that group he never met.

Even before Sessions testified, attention in Washington swiveled to whether Trump might seek to fire Robert Mueller, named last month by the Justice Department to head a federal probe into the Russia issue.

Sessions told the senators he has confidence in Mueller but said he had "no idea" if Trump did because he had not spoken to the president about the matter. Asked whether he would ever take any action to remove Mueller, Sessions said, "I would not think that would be appropriate for me to do."

Deputy Attorney General Rod Rosenstein, the person who would be responsible for carrying out any such dismissal, told a different congressional panel he would not fire Mueller without good cause and he had seen no such cause.

Sessions, a former Republican U.S. senator and an early supporter of Trump's presidential campaign, testified just five days after Comey told the panel Trump ousted him to undermine the agency's investigation of the Russia matter. Sessions had written a letter to Trump recommending Comey's firing.

In March he acknowledged he met twice last year with Russia's ambassador to Washington, Sergei Kislyak. Sessions said he did not mislead Congress because the encounters were part of his job as a U.S. senator, not as a Trump campaign representative. Sessions recused himself from the Russia investigation in March after the revelations of the two Kislyak meetings.

The abrupt dismissal of Comey prompted Trump's critics to charge that the president was trying to interfere with a criminal investigation.

Asked about media reports that he had met with Kislyak on a third occasion at a Washington hotel last year, Sessions testified that did not remember meeting or having a conversation with the ambassador at the event. Sessions said he "racked my brain" and had no meeting with any Russian in his capacity as a Trump campaign adviser.