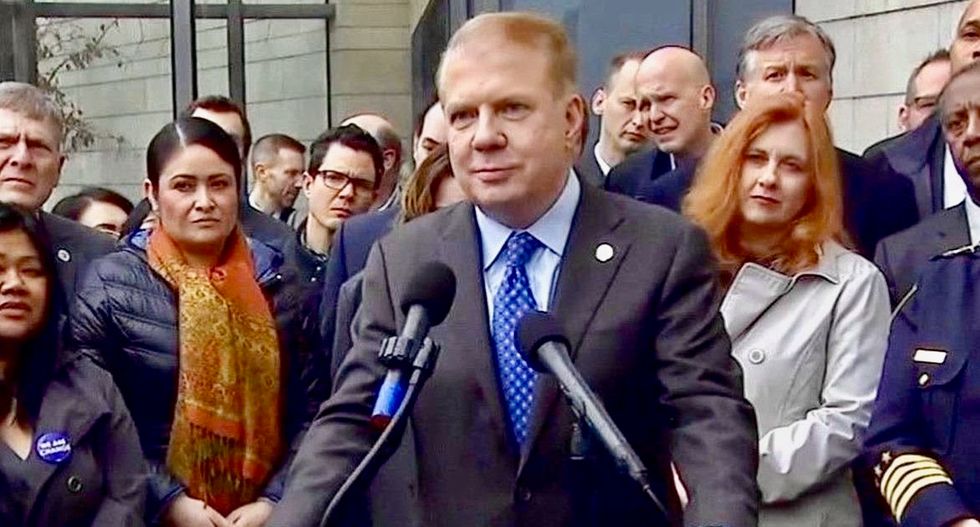 A man has dropped a sexual abuse and child prostitution lawsuit against Seattle Mayor Ed Murray that claimed the Democrat paid him for sex when he was a teenager in the 1980s, the man's attorney said on Wednesday.

In a series of Twitter messages, Lincoln Beauregard, a lawyer for accuser Delvonn Heckard, wrote that his client was "delaying" his lawsuit until the mayor was out of power, saying "Delvonn wants to finish counseling and spare the city more theatrics with the sitting mayor."

In April, Heckard, 46, sued Murray, claiming the mayor paid him for sex when Heckard was a homeless, drug-addicted teenager, according to the lawsuit.

The explosive allegations caused Murray, the top elected official in the largest city in U.S. Pacific Northwest, to scrap his campaign for re-election, potentially ending the political career of a lawmaker praised as a champion of gay rights.

Murray has consistently denied the claims against him, calling the accusations politically motivated, but also garnered criticism for questioning the trustworthiness of the accusers.

A spokesman for the mayor's office did not immediately respond to a request for comment on Wednesday, nor to questions about whether Murray, who had been favored to win re-election, would re-enter a crowded field of candidates vying for his job in a primary election in August.

A Superior Court judge in King County, which encompasses Seattle, granted Heckard's motion to dismiss the claims against Murray on Tuesday, according to a copy of the signed order.

In the motion, Beauregard said Heckard will have a better chance of getting a fair trial when Murray is out of office.

Murray, 62, Seattle's first openly gay mayor, had planned to finish his term in office, which began in 2014 and ends at the end of the year.

In 2008, two other men accused Murray of abusing them when they were teenagers in the 1980s, and a fourth accuser made similar allegations against Murray in a sworn court declaration, according to the Seattle Times newspaper.

As a senator in the Washington state legislature, Murray was a vocal advocate for gay rights and legalizing same-sex marriage.

Earlier this year, Seattle sued President Donald Trump over his executive order cracking down on sanctuary cities that limit their cooperation with federal immigration agents.