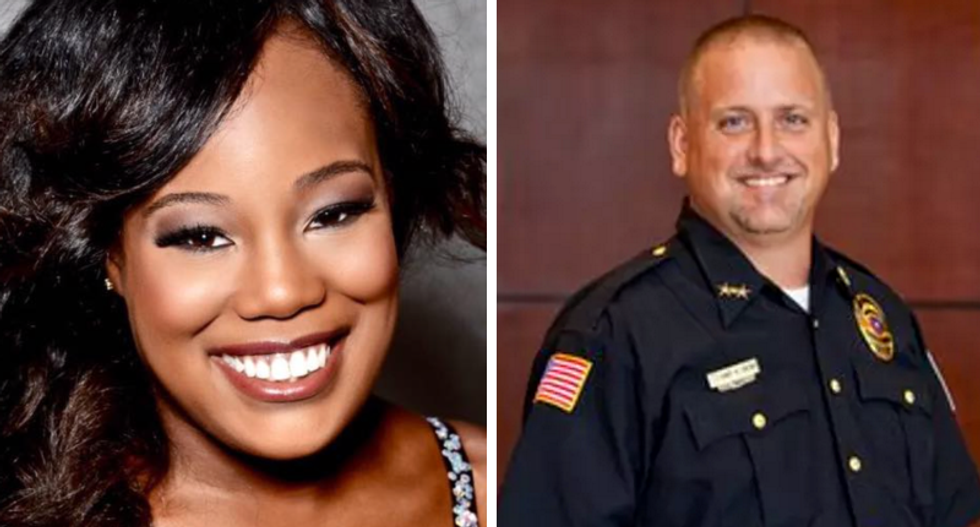 According to a Dallas/Ft. Worth CBS affiliate, a school board member and police chief in Commerce, Texas have resigned amid controversy surrounding board member Michael Beane's racist tirade against a black beauty queen in May.

In late May, a 23-year-old woman named Carmen Ponder swerved to avoid an erratically-driven truck -- and was soon confronted in a Walmart parking lot by elected school board member Beane, who began screaming at her. Beane put his hands on her and called her a "black b*tch" for swerving around what was later revealed to be his 14-year-old daughter, whom he was teaching how to drive without a permit.

Ponder initially believed the man who yelled at her was Commerce Police Chief Kerry Crews, because she was asked to apologize to "the police chief" for upsetting him by an off-duty officer-- a man police now say is Crews. When Ponder refused, she was arrested and spent the night in jail.

Now, both Police Chief Crews and Board Member Beane have resigned amid the nationwide backlash from the story. The Root noted that although Crews resigned as police chief on Monday, he is taking a position as assistant to the city manager -- a position he created.

“Neither Beane nor Crews accept responsibility for their actions, nor the pain they caused Ms. Ponder, but they have been sure to paint themselves as victims of the Black Lives Matter movement. Ms. Ponder’s experience with both of these men shows why they would allude to this," Lee Merritt, Ponder's attorney, told The Root.