'The truth gets stranger all the time': Chuck Todd goes down the rabbit hole of bombshell Flynn-Russia hack story 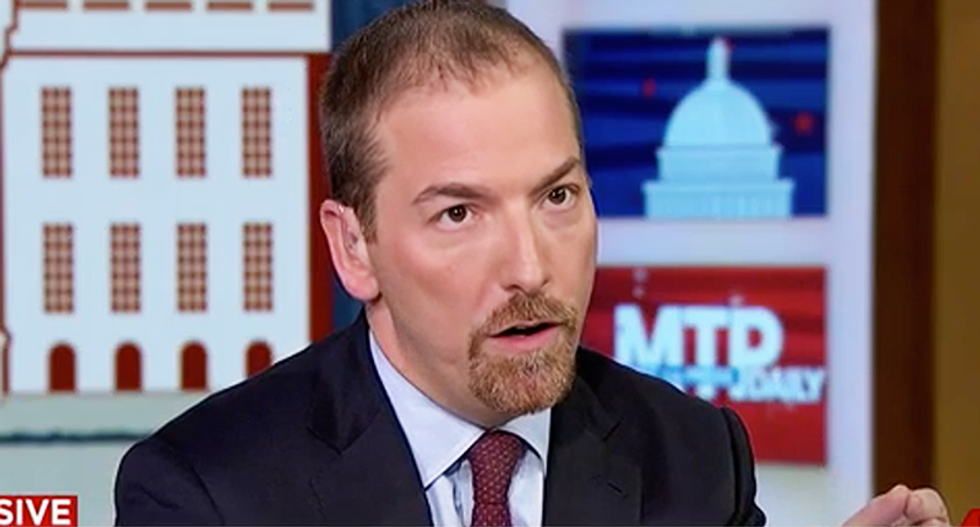 In a segment aired minutes after a bombshell report about Russian hacking and Mike Flynn, MSNBC host Chuck Todd hosted a panel featuring the Wall Street Journal reporter who broke the story about the larger implications of the story.

Todd asked WSJ reporter Shane Harris, the man whose story broke open the revelations, to explain the story that included Hillary Clinton's emails, disgraced national security adviser Mike Flynn and his son and "a gentleman who is now dead."

The dead man, who's name was Peter W. Smith, was a "longtime GOP operative" who, according to Harris, was in contact with Flynn as he saw through a personal vendetta to obtain Clinton's emails by communicating with Russian hackers. Flynn, Harris continued, was aware of Smith's activities.

"Did he find the emails?" Todd asked, matter-of-factly.

"We can't say for sure," Harris said. "Smith said he found emails, and that he was unable to guarantee that they were 100 percent authentic."

Because he was uncertain of their veracity, Harris continued, Smith had the hackers "send them to WikiLeaks instead."

Todd then noted that each hack that rocked the 2016 presidential elections -- Clinton's server, her former campaign manager John Podesta's emails, and the Democratic National Committee emails -- were all separate hacks that get "conflated" with each other. Smith, Harris noted, does not appear to have been involved in any of those hacks based on his investigation.

The panel then turned to Hugh Hewitt, MSNBC's newest host, to discuss an aspect of the article that appeared to be an "overdenial" -- when someone from President Donald Trump's campaign insisted that Smith never worked for the campaign, and than any discussion he and Flynn had did not pertain to the campaign.

"The [Russia] collusion story was dead until Shane's most excellent story came along," Hewitt said, noting that now that the Flynn-Smith hack article is out, Special Counsel Robert Mueller's team will be sending "preservation orders" to everyone mentioned in the report.

They then turned to Daniela Leger, the vice president of communications at the Center for American Progress, who agreed with Todd's assertion that Clinton's lost emails from her private server are unlikely to ever go public because they appear to not exist. Shane's report, she argued, doesn't provide evidence of anything but "muddies the waters" of the Russia probe.

Todd went on to quote former CIA Director John Brennan, who once said "sometimes people go down a treasonous path that they don't know that they went down."

"The truth gets stranger all the time," Todd concluded.

Watch the whole segment below via MSNBC.

The U.S. Secret Service will protect former President Donald Trump and more than a dozen members of his family, including extended family members, after the 45th President, defying usual agency regulations, ordered the expanded protections.

"Trump issued a directive to extend post-presidency Secret Service protection to 14 members of his family who were not automatically entitled to receive it," The Washington Post reports.