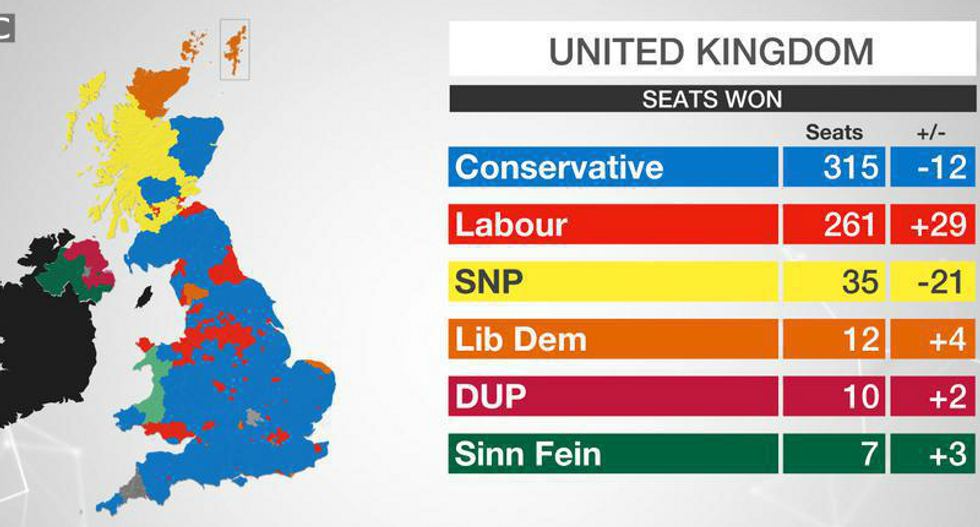 Latest election results in the United Kingdom (screengrab from @BBCElection)

The surprise loss for the Conservative Party's sitting Prime Minister, Teresa May, came after a year full of upheaval for the Brits -- first with the country's Brexit referendum last summer, then former PM David Cameron's resignation that led to May becoming sitting PM.

With not all districts declared, Prime Minister May lacks the results necessary to form another Tory majority government. The party of Margaret Thatcher, Tories are similar to country club Republicans in America.

In April, May called for the "snap election" to decide which party would lead the country's exit from the European Union, and while the voters have spoken, which coalition will choose the next Prime Minister remains very much in doubt.

Sources close to May have claimed that she will not resign, but there has yet to be any official statement on the Prime Minister's plans.

"The party’s vote share was down to around 2%, whereas in 2015 under its former leader Nigel Farage it secured 12.6% of the national vote," The Guardian reported.

"In Ukip’s only Commons seat, Clacton in Essex, the party slumped from a vote of 19,642 in 2015 for Douglas Carswell, to just 3,347 for Paul Oakley, the candidate that replaced him after he quit the party," The Guardian noted.

Shortly after the polls closed, UKIP Leader Paul Nattall said that Brexit is now in jeopardy:

Despite press criticism that Labour Leader Jeremy Corbyn was too progressive, the results showed Labour to be the biggest winner of the evening.

With the final outcome not yet know, Leader Corbyn has claimed more seats than his immediate predecessors Ed Milliband and Gordon Brown.

We have had enough. We demand a fairer society, #ForTheMany, not the few. Please watch and RT this powerful film by… https://t.co/1tPTPTLRlL
— Jeremy Corbyn (@Jeremy Corbyn) 1496412419.0

It is too soon to predict if Labour will be able to form a minority government, but Corbyn's results were impressive:

Corbyn has already called for the resignation of Prime Minister May.

Though it may be some time before all the implications are known.

Hearing from a Labour friend that Donald's nasty attacks on the Mayor of London hurt the Tories in the closing days.
— Simon Rosenberg (@Simon Rosenberg) 1496976879.0

One of the other major takeaways is what appears to be a surge in youth turnout.