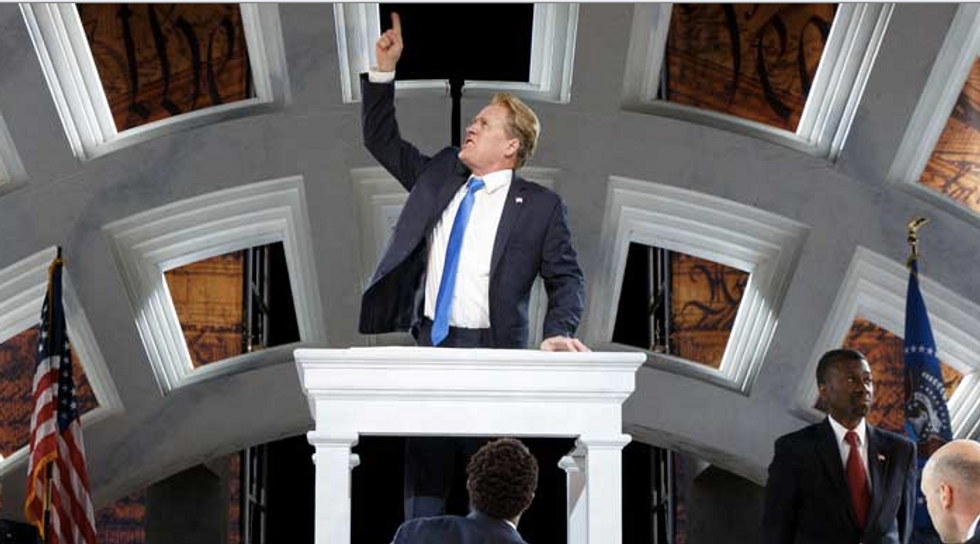 Two people who disrupted a controversial New York production of Shakespeare's "Julius Caesar" took to social media on Saturday to defend their protest of the performance that portrays the assassinated Roman leader with an actor costumed to resemble U.S. President Donald Trump.

The open-air stage production featuring a magnetic blond businessman as the ill-fated Caesar, prompted outrage from the president's supporters who said the link with Trump would encourage political violence. The flap led two corporate sponsors to pull out.

"Last night, Conservatives took back the theater, an institution they have been locked out of for too long. The left lost their safe space!" Laura Loomer, a journalist for right-wing media organization The Rebel, wrote on Twitter.

Loomer, 24, was arrested for misdemeanor criminal trespassing and disorderly conduct after rushing the stage during the open-air performance of the play on Friday evening, said a New York police spokesman. She was later released with a ticket ordering her to appear in court.

The Public Theater, which is staging the play in Central Park, has responded to the criticism by saying the production is valid artistic expression in keeping with a long tradition of William Shakespeare adaptations.

At the same time as Loomer jumped on the stage, a second protester stood up in the audience to loudly criticize the production and audience. "You are inciting terrorists, the blood of Steve Scalise is on your hands," the man yelled. He was then led away by security guards.

The protester later identified himself online, where he posted the video, as Jack Posobiec, who wrote a book called "Citizens for Trump."

U.S. Congressman Steve Scalise, the No. 3 Republican in the U.S. House of Representatives, was critically wounded on Wednesday when he and three others were shot on a baseball field in Alexandria, Virginia. The attacker, who had raged against Trump on social media, was killed by police returning fire.

Earlier this week, Delta Air Lines Inc and Bank of America Corp pulled funding of the production, hours after Trump's son Donald Jr. sent a Twitter message questioning whether it was art or political speech.

In Posobiec's video from New York, audience members are heard booing to show displeasure with the disruption, as Posobiec shouts to call them "Nazis." Posobiec was not arrested.

The nonprofit Public Theater noted that like its critics, it also has the right of free speech under the first amendment of the U.S. Constitution. It vowed to continue with its staging of "Julius Caesar" in an enclosed theater in New York's Central Park.

"While we are champions of the first amendment, this interruption unfortunately was part of a paid strategy driven by social media," it said on Twitter.

Loomer and Posobiec denied they were paid to protest.

About two weeks ago, comedian Kathy Griffin faced a backlash over her posing for a photograph with a fake severed and bloodied head resembling Trump. As a consequence, she lost her job as a co-host of CNN's New Year's Eve coverage.