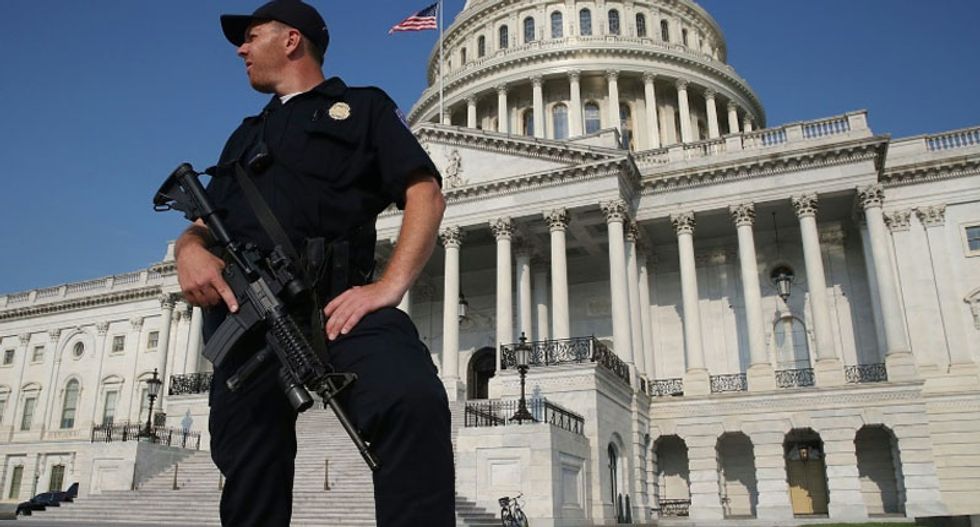 At least five people people including a top Republican congressman were wounded in a Washington suburb early Wednesday morning when a shooting erupted as they practiced for an annual baseball game between lawmakers.

Senior congressman Steve Scalise was shot in the hip, according to fellow Republican lawmaker Mo Brooks who told CNN at least two law enforcement officers and one congressional staffer were also shot in the incident in Alexandria, Virginia.

Police said the shooting suspect was in custody and "not a threat."

President Donald Trump said he was closely monitoring the developments in Virginia, and that Scalise, the majority whip who rallies Republican votes in the House of Representatives, was expected to recover.

"Rep. Steve Scalise of Louisiana, a true friend and patriot, was badly injured but will fully recover. Our thoughts and prayers are with him," Trump tweeted.

In a statement earlier, Trump described himself as "deeply saddened by this tragedy," saying his "thoughts and prayers are with the members of Congress, their staffs, Capitol Police, first responders and all others affected."

About 25 senators and congressmen were at the practice, according to Senator Jeff Flake who told reporters some 50 shots rang out in the exchange of fire between the gunman and the lawmakers' security detail, at around 6:30 am (1030 GMT).

Flake said the suspect was a white man with dark hair, apparently in his 40s or 50s, wearing jeans and a blue shirt.

Asked whether he thought it was a random shooting, Brooks told CNN: "It sure as heck wasn't an accident."

"People know this is the Republican baseball team practicing," he said. "You can tell. You can recognize many of us. You can see our security detail."

"It is pretty well known at the neighborhood who those folks are on the baseball field and where we practice."

"He knew who we were. I'm a former prosecutor and, yeah, he was going after elected officials, congressmen."

"He was not able to move on his own power. He was dragging his body from the second base infield to the outfield to get away from the shooter while all this firing was going on," Brooks said.

"He is a physician and we deferred to his judgment on what to do. I held a cloth over the wound to stop the bleeding as Brad was getting some kind of scissors device to cut through the pants to try to have better access to Steve Scalise's wound and his hip."

Brooks said he took off his belt and used it as a tourniquet to stop the bleeding on a staffer who was shot in the leg.

Local schools were locked down.

"A lock-in takes place if a threat is identified outside the school. All school doors are locked but classes continue as normal. No entry into or exit from the school will be allowed," said a message from Alexandria City Public Schools.

Scalise, a representative from the southern state of Louisiana elected to Congress in 2008, heads the conservative House caucus known as the Republican Study Committee.

The staunch conservative is among the lawmakers leaving the drive to repeal former president Barack Obama's signature health care law, among other top Republican priorities.