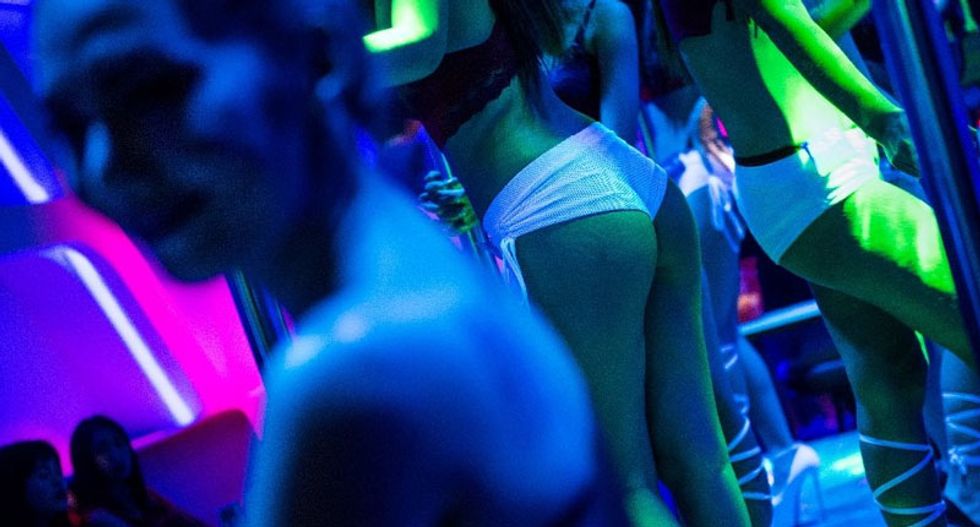 Thailand's laid-back and tolerant attitude has turned it into one of the world's top party destinations, but for some senior government figures, things can go a little too far (AFP Photo/Roberto SCHMIDT)

Twerking nine to three is the new way to make a living for a teenage Thai music star whose eye-popping dance moves have enraged the country's military strongman.

Country music singer Lamyai Haithongkham, known for her signature "Nine Levels" twerking routine, has become a sensation in her homeland thanks to the kind of gyrating move that might even make Miley Cyrus pause for thought.

But now the 18-year-old has agreed to tone down her dancing after coming under fire from the country's military leader.

"When I talk to my friends I joke that we will have to reduce her twerks from nine to three," Lamyai's manager Prachakai Naowarat, told AFP on Wednesday.

"But yes, after the prime minister mentioned her name we will tone down her dance moves and her wardrobe."

Web clips of her performances have racked up more than 240 million views in the last six months.

In less than a week Prayut has brought up Lamyai's dance moves with the press on three separate occasions, blasting the singer for her skimpy clothing and suggesting that foreigners are to blame for encouraging such lewdness.

"Just because foreigners are doing it doesn't mean we have to," Prayut told reporters in his first tirade on Friday.

"The way she dances, she's about to show all her genitals already. I don't want to talk about it, people will say I'm crazy. But I want everyone to help solve this problem."

He brought up the singer's dance moves again on Monday and Tuesday, although he appeared mollified once told the young star would be more demure in future.

Thailand is a land of contrasts when it comes to sexuality.

Its laid back and tolerant attitude has turned it into one of the world's top party destinations and a notorious sex tourism hotspot.

But a deeply ingrained social conservatism still runs through society, fuelled by concerns among some that outside influences have polluted the country's morals.

On Tuesday a government spokesman defended the junta chief's scoldings by saying the singer's racy dancing style was to blame for crimes like "rape, murder and prostitution."

"If we don't try to prevent provocative and indecent acts these problems will never go away," said Sansern Kaewkumnerd.

Lamyai sings "luk thung" songs, a country music genre that has come to blend traditional lyrics about love and poverty with eye-catching dance moves and outfits.

Since seizing power three years ago Prayut has become renowned for his off the cuff tirades, often aimed at how women dress or behave.

When two British backpackers were murdered in late 2014, one of the victims raped before she was killed, Prayut suggested pretty foreigners should avoid wearing bikinis, comments he later apologised for.

He has also previously stated that gender equality would "deteriorate" society and likened women who wear too little clothing to unwrapped candies.

Examples of Lamyai's performances can be found here: