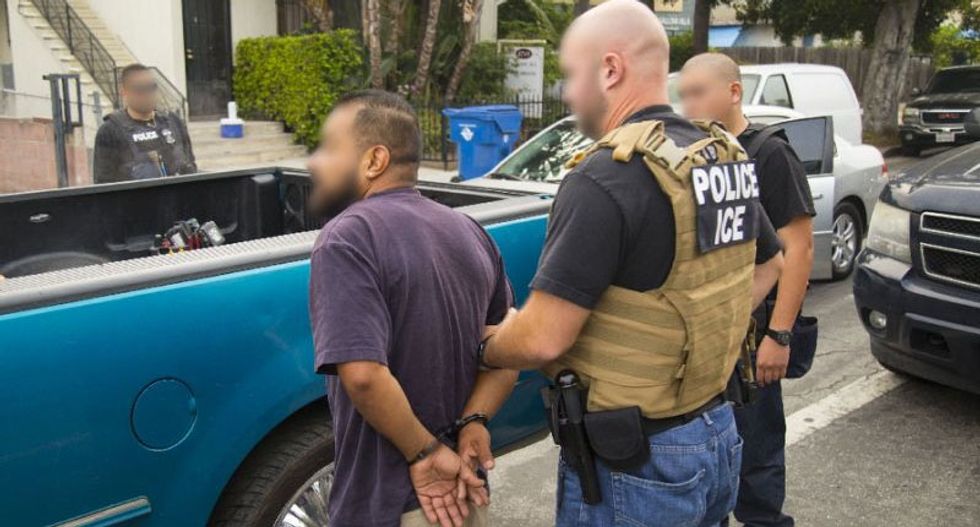 U.S. immigration authorities have arrested and moved to deport 199 Iraqi immigrants, mostly from the Detroit area, in the last three weeks after Iraq agreed to accept deportees as part of a deal removing it from President Donald Trump's travel ban, officials said on Wednesday.

In the Detroit area, 114 Iraqi nationals were arrested over the weekend, and 85 throughout the rest of the country over the past several weeks, Gillian Christensen, a U.S. Immigration and Customs Enforcement spokeswoman, said in a statement.

The actions came as part of the Trump administration's push to increase immigration enforcement and make countries, which have resisted in the past, take back nationals ordered deported from the United States.

The crackdown on Iraqi immigrants followed the U.S. government's decision to drop Iraq from a list of Muslim-majority nations targeted by a revised version of Trump's temporary travel ban issued in March.

The overwhelming majority of those arrested had criminal convictions for crimes including murder, rape, assault, kidnapping, burglary, drug trafficking, weapons violations and other offenses, Christensen said.

As of April 17, 2017, there were 1,444 Iraqi nationals with final orders for removal, she said. Since the March 12 agreement with Iraq regarding deportees, eight Iraqi nationals have been removed to Iraq.

Dozens of Iraqi Chaldean Catholics in Detroit were among those targeted in the immigration sweeps, some of whom fear they will be killed if deported to their home country, immigration attorneys and family members said.

“It is very worrisome that ICE has signaled its intention to remove Chaldean Christians to Iraq where their safety not only cannot be guaranteed, but where they face persecution and death for their religious beliefs,” Martin Manna, president of the Chaldean Community Foundation, said in a statement on Wednesday.

At least some of those arrested came to the United States as children, got in trouble and already served their sentences, according to immigration attorneys and activists. Some have lived in the United States so long they no longer speak Arabic.

An Iraqi official previously said Iraqi diplomatic and consular missions would coordinate with U.S. authorities to issue travel documents for the deportees.