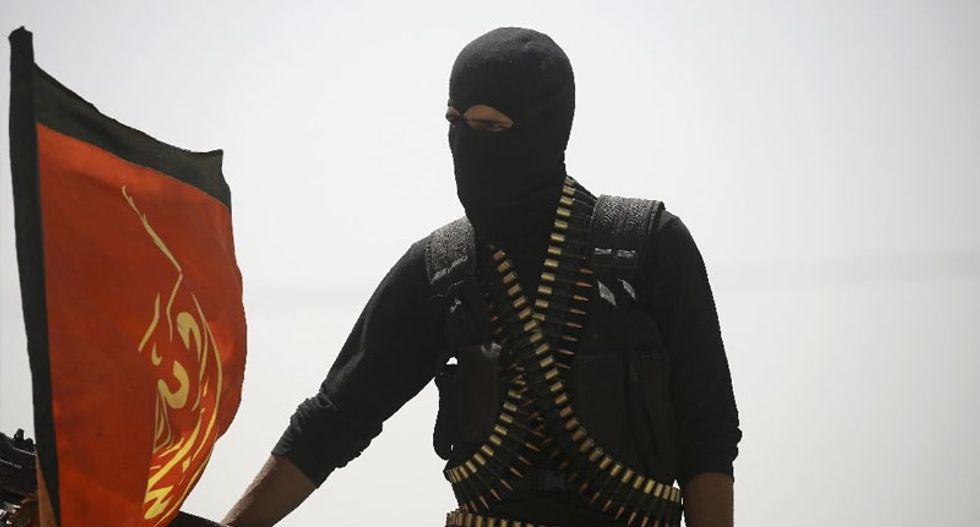 A member of the Syrian Democratic Forces (SDF) stands in the village of Hazima, on the northern outskirts of Raqa, on June 6, 2017 (AFP Photo/DELIL SOULEIMAN)

US-backed fighters gained ground against the Islamic State group in the streets of Raqa on Wednesday, a day after their months-long offensive finally broke into the jihadists' Syrian bastion.

The Syrian Democratic Forces militia has spent seven months advancing on the city, with backing from the US-led coalition bombing IS in Syria and neighbouring Iraq.

Captured by the jihadists in 2014, Raqa became synonymous with IS atrocities including beheadings and public displays of bodies, and also emerged as a hub for planning attacks abroad.

On Tuesday, the SDF's Arab and Kurdish fighters finally broke into the eastern Al-Meshleb district of the city.

Early on Wednesday, they captured the neighbourhood and the Harqal citadel to the west of the city, the command of Operation Wrath of the Euphrates said.

The citadel sits on a hilltop roughly two kilometres (just over a mile) from the city limits.

Fighting was also raging in a military complex around two kilometres north of the city, the Syrian Observatory for Human Rights said.

The Britain-based monitoring group said the US-led coalition had carried out heavy bombing raids to back the advance.

Reported civilian casualties in coalition air strikes have swelled as the SDF has ramped up its offensive.

Late on Monday, at least 21 civilians were killed in a coalition strike as they tried to escape Raqa by dinghy on the Euphrates River, the Observatory said.

An estimated 300,000 civilians were believed to have been living under IS rule in Raqa, including 80,000 displaced from other parts of Syria.

But thousands have fled in recent months, and the UN humanitarian office said on Tuesday that it estimated about 160,000 people remained in the city.

Its regional spokesman David Swanson said as many as 100,000 people "may stay trapped" inside during the assault.

The International Rescue Committee said it was "deeply concerned for the safety of civilians in Raqa" after a drop in numbers fleeing the city in the past week.

That decrease could indicate that IS intends to use the remaining civilians "as human shields," the aid group warned.

The SDF has scored a series of victories since launching its operation to take Raqa in November, including capturing the strategic town of Tabqa and its adjacent dam in May.

On Tuesday, it made the long-awaited announcement that the battle for Raqa itself had begun.

Along with Mosul in Iraq, Raqa was one of the twin pivots of the self-styled Islamic "caliphate" that IS declared nearly three years ago.

US-backed forces are battling IS in Mosul too and have now confined the jihadists to a few neighbourhoods around the Old City.

Coalition commander Lieutenant General Steve Townsend said that defeating IS in Raqa would "deliver a decisive blow to the idea of ISIS as a physical caliphate".

The coalition began striking IS jihadists in Iraq in August 2014 and expanded its operations to Syria the following month.

In recent weeks, it has also targeted pro-government forces near Syria's border with Jordan.

The US-led coalition said on Tuesday that it had hit a regime convoy that was nearing the Al-Tanaf garrison, used by US and British troops to train Syrian rebels to fight IS.

The coalition said the contingent was "well advanced" into the 34-mile (55 kilometre) de-confliction zone, where any intrusion is considered hostile.

The Observatory said that at least 17 pro-regime troops were killed in the air strike.

It was the second time in less than a month that the coalition had attacked pro-regime forces that strayed too near to the garrison.

The Syrian army appears eager to push east towards the Jordanian and Iraqi borders where some of the country's main oilfields lie before the area can be seized from IS by the SDF or Western-backed rebels.