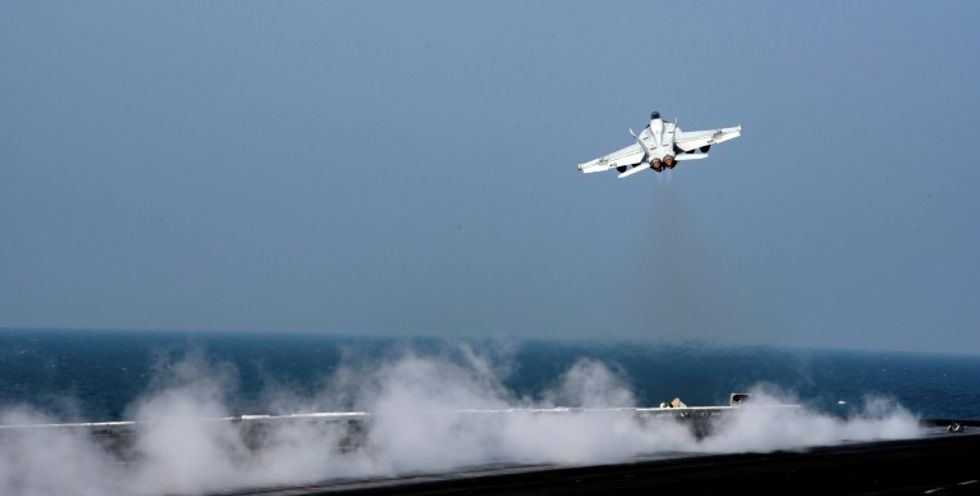 An American fighter jet on Sunday shot down a Syrian warplane that the US-led coalition said attacked its allies in the fight against the Islamic State group in the war-torn country.

The escalation comes as Syria's six-year-old war becomes ever more complex, with US forces and their allies converging on the northern IS bastion of Raqa in close proximity to Russian-backed regime troops.

Further complicating matters, Iran said it launched missile strikes Sunday against "terror bases" in Syria's northeastern Deir Ezzor province in revenge for deadly attacks on its capital claimed by IS.

The US-backed Syrian Democratic Forces -- an alliance of Kurdish and Arab fighters -- is battling to oust the jihadists from Raqa, and broke into the IS stronghold city last week.

Government forces are not involved in the battle for Raqa, but they are advancing in an area southwest of the city, skirting around SDF fighters, their eyes set on the oil-rich province of Deir Ezzor.

"Aircraft from the 'international coalition' targeted one of our fighter planes in the Resafa region of southern Raqa province this afternoon while it was conducting a mission against the terrorist Islamic State group," said the army.

It warned of "the grave consequences of this flagrant aggression".

The US-led coalition later confirmed it shot down the Syrian warplane it said had dropped bombs near SDF forces.

"At 6:43 pm (1743 GMT), a Syrian regime SU-22 dropped bombs near SDF fighters... in accordance with rules of engagement and in collective self-defence of Coalition partnered forces, was immediately shot down by a US F/A-18E Super Hornet," the Combined Joint Task Force said in a statement.

It said that two hours earlier, forces loyal to President Bashar al-Assad had attacked the SDF in Jaaydine, south of Tabqa, "wounding a number of SDF fighters and driving the SDF from the town".

Coalition aircraft stopped the advance of Syrian pro-regime troops with a "show of force," the coalition added.

The Syrian army said the "aggression" against it came as government troops and their allies made ground in the battle against IS "on several fronts in the badiya".

It was referring to a large stretch of desert that extends over some 90,000 square kilometres (35,000 square miles) from central Syria to the borders with Iraq and Jordan to the east and southeast.

Since 2015, much of the badiya has been held by the jihadist group, but Syria's army has been chipping away at it for months.

The Britain-based Syrian Observatory for Human Rights said the fighting broke out in two villages, Jaaydine and Shouwayhane, some 40 kilometres (25 miles) south of Raqa.

The Observatory said the clashes came after regime troops had reached the edges of Resafa, also in the same area, as part of an offensive to reach Deir Ezzor.

The regime has lost control of many oil and gas fields since the start in 2011 of Syria's conflict, especially in the provinces of Homs and Deir Ezzor.

SDF fighters entered Raqa on June 6 after months of heavy clashes to encircle it, and the US-led coalition has been backing them with air strikes, equipment and special forces advisers.

Since then they have seized a few neighbourhoods, including one in the east and one in the west, and are battling to push into the Old City of Raqa.

An estimated 300,000 civilians were believed to have been living under IS rule in Raqa, including 80,000 who fled there from other parts of the country.

IS seized Raqa in 2014, transforming it into the de facto Syrian capital of its self-declared "caliphate".

Iran's elite Revolutionary Guard said they fired Sunday "medium-range missiles" targeting "a terror base" in Deir Ezzor "in retaliation" for the June 7 attacks in Tehran claimed by IS.

Seventeen people were killed when gunmen and suicide bombers attacked the parliament complex and the shrine of revolutionary leader Ayatollah Ruhollah Khomeini in the Iranian capital.

Iranian television showed footage of the missiles being launched into the night sky.

It was the first missile attack by Iran outside its own territory in 30 years, since the Iran-Iraq war of 1980-88, media in the Islamic republic reported.

Senior Iranian officials had put the blame on Riyadh after the attacks, saying Saudi Arabia was "promoting terrorist groups" in Iran, while the Guard vowed to avenge the bloodshed.

Iran has sent to Syria military advisers as well as thousands of "volunteer" fighters recruited among its own nationals, and among Shiite communities in Afghanistan and Pakistan.

More than 320,000 people have been killed in Syria since the conflict began with anti-government protests in March 2011 before turning into a complex war involving regional and international players.