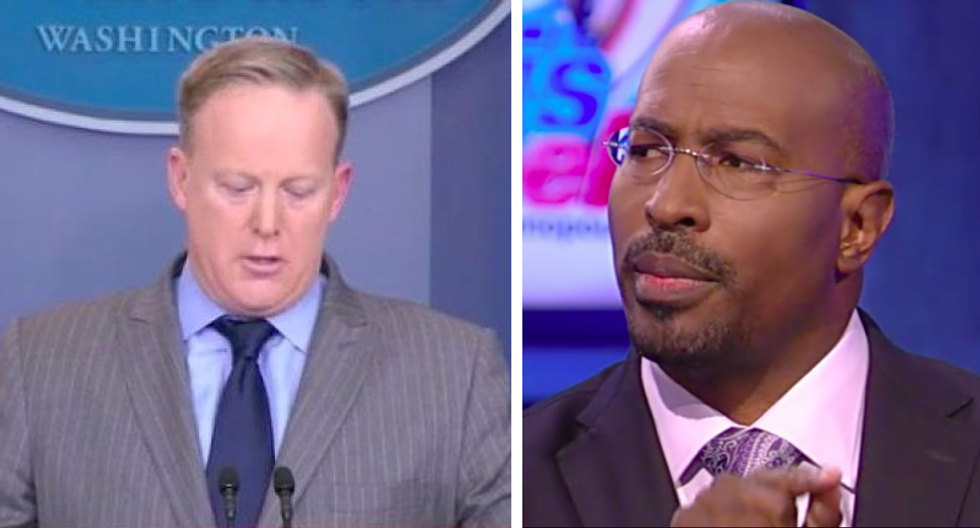 The progressive commentator had it out with President Donald Trump's former deputy communications director Bryan Lanza on Friday's "Erin Burnett Out Front."

Kate Bolduan, filling in for Burnett, noted that Spicer is having a hard time answering questions about whether or not Trump still considers climate change to be a hoax perpetrated by the Chinese.

"Listen, here's what I know," Lanza said, unable to answer the question. "I think you guys are looking at the quick sound bite with Sean and on camera interviews. That's fine, but he answers a lot of interviews in the print media every day. I think the White House is providing responses to tons of stories on hundreds of outlets."

Just not on that question.

"He didn't answer any of those questions to print reporters, podcasters, TV reporters," Jones schooled. "What you're now seeing is Sean Spicer as the incredible shrinking man. When he first came out he was full of bluster and energy. He looked like a depressed little kid standing up there. Ordinarily, when you see someone looking like that, he's like a dead man walking in D.C., but it looks like he's going to be a zombie character. But they won't take him out of the job. They won't let him do his job. He just has to be out there and be a piñata for the press. And it's really sad, because the questions he's being asked -- if he wants to answers those questions to print reporters or podcasters or to third graders, he can't answer them because he apparently doesn't know or hasn't been given authority to speak."

"Trump has said basically it took 25 years for 190 countries to come together and now he wants to start something on his own," Jones said. "Nobody is saying they want to do that. In fact, he has created the biggest power vacuum on the planet by calling that press conference and now you see China rushing forward, California rushing forward, and what he's actually done is give a tremendous gift to his opponents."

'He looks like a depressed little kid': Van... by sarahburris