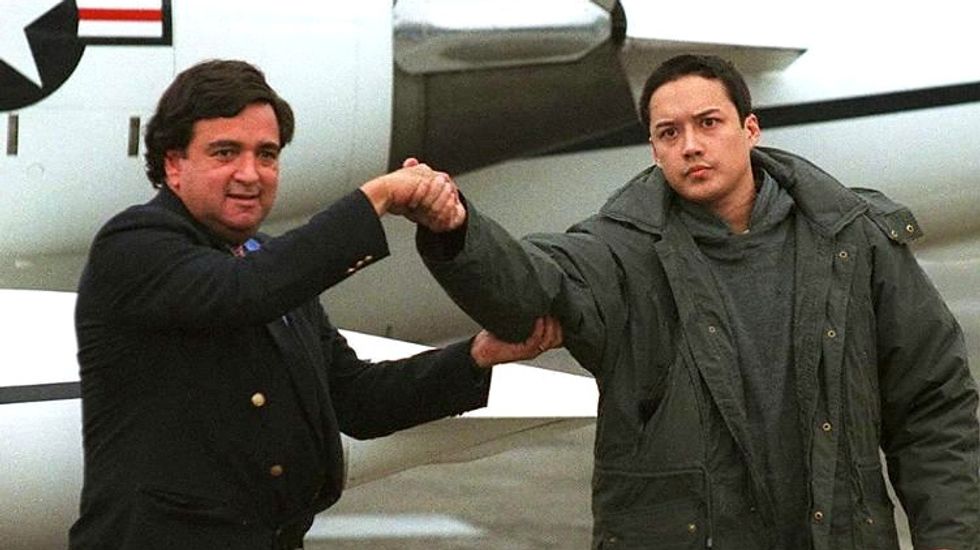 US Rep. Bill Richardson (L) raises a hand of American missionary Evan Carl Hunziker (R) as they arrive at an US Air Force Base in Japan, on November 27, 1996

Veteran former U.S. politician and diplomat Bill Richardson offered on Friday to visit North Korea to secure the release of three detained Americans and a Canadian after U.S. university student Otto Warmbier was brought back in a coma.

Richardson, a former New Mexico governor and congressman who visited North Korea in the 1990s and sought the release of detained Americans, told Reuters he made the proposal in a letter to the North Korean mission to the United Nations.

"I have proposed that as of today," Richardson said, adding that he argued in the letter it was in North Korea's interest to free the detainees unconditionally, "in the light of its failure to properly take care and handle" Warmbier's case.

Doctors say the 22-year-old university student who was returned to the United States this week after being held in North Korea for 17 months has a severe brain injury and is in a state of "unresponsive wakefulness."

Richardson said he and members of his foundation had met with North Korean diplomats 20 times in the past year to try to secure the release of Warmbier and the others - Korean-Americans Tony Kim, Kim Dong Chul and Kim Hak Song and Korean-Canadian Hyeon Soo Lim.

He said the foundation's executive director traveled to North Korea in November and proposed that Richardson travel there for the purpose, but the North Koreans did not respond.

Richardson said he had yet to inform the Trump administration about his letter, but had briefed the State Department and White House in recent weeks on his past efforts.

In 1996, Richardson secured the release of a 26-year-old American, Evan Hunziker, who was held for three months in North Korea on spying charges.

He called on the administration to find a way to ensure Warmbier "gets the best medical care to see if he can be revived".

"This is going to be a long, protracted convalescence; They should do this as a symbol that the U.S. government will stand behind our citizens who have been violated," Richardson said.

Trump said on Friday that what had happened to Warmbier was "a truly terrible thing."

Richardson, who has been in close contact with the Warmbier family, said he did not believe Pyongyang's explanation that the student's condition was the result of botulism and a sleeping pill.

"It could be some kind of stress from the imprisonment; it could be beatings and torture," he said, adding that North Korea should cooperate with an investigation, perhaps carried out by the United Nations.

"They should have a detailed medical explanation why this happened and why they didn’t disclose this a year ago. This is unconscionable," he said.