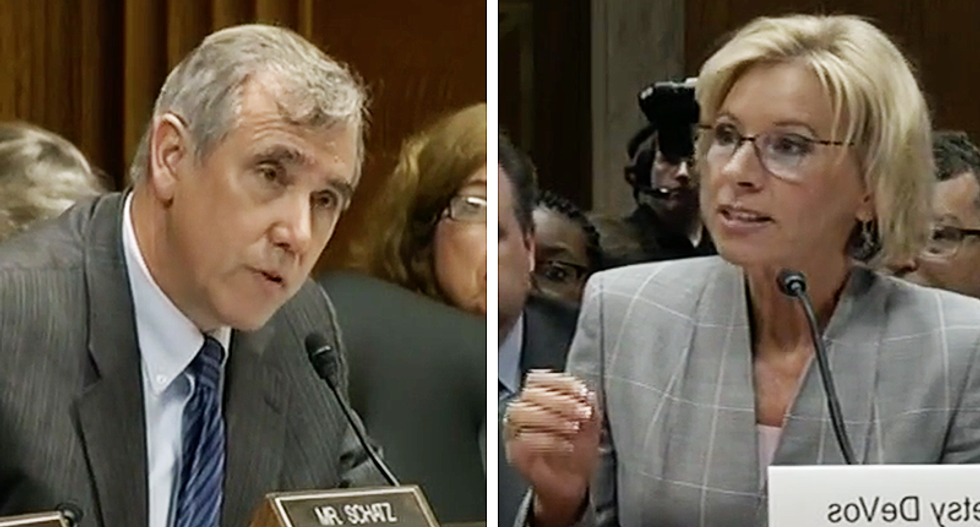 Sen. Jeff Merkley (D-OR) hammered Secretary of Education Betsy DeVos during a Senate hearing Tuesday about her private and charter schools being able to discriminate against LGBT students.

"I think that’s very important for the public to know that the Secretary of Education refused to answer the question," Merkley said as he asked the question over and over and DeVos only repeated her soundbite.

Under federal law, any institution that receives federal funding must abide by federal laws and regulations. Those laws include anti-discrimination policies against LGBT people. DeVos was quick to repeat that all schools must follow the law, but in many cases, there isn't decided law that protects LGBT students. Therefore, DeVos's federal funds could continue to go to schools that manage to find legal ways to discriminate against students.

"I said it before and I say it again: schools that receive federal funds must follow federal law," was DeVos' standard answer.

"Federal law is foggy. Will it be allowed?" Merkley replied.

"On areas where the law is unsettled this department is not going to be issuing decrees," she admitted.

"Is discrimination going to be allowed or not allowed?" he asked again.

"On areas of unsettled law, the Congress has to decide and settle," she replied.

"Are you refusing to answer the question?" he asked.

"I am going back to what I said earlier," she claimed.

"What you said earlier didn't help us. It is an area of unsettled law. But what I think you said where it that where it is unsettled, such discrimination will continue to be allowed under your program. If that is incorrect, please correct it for the record," Merkley said.

"Again, for schools that receive federal funds, federal law must be followed," she repeated.

"What is that law in this case? Will such religious discrimination be allowed? Answer the question," he hammered.

DeVos has nominated someone to head the Civil Rights Office that once claimed she faced discrimination for being white. DeVos also has a history of supporting conversion therapy.