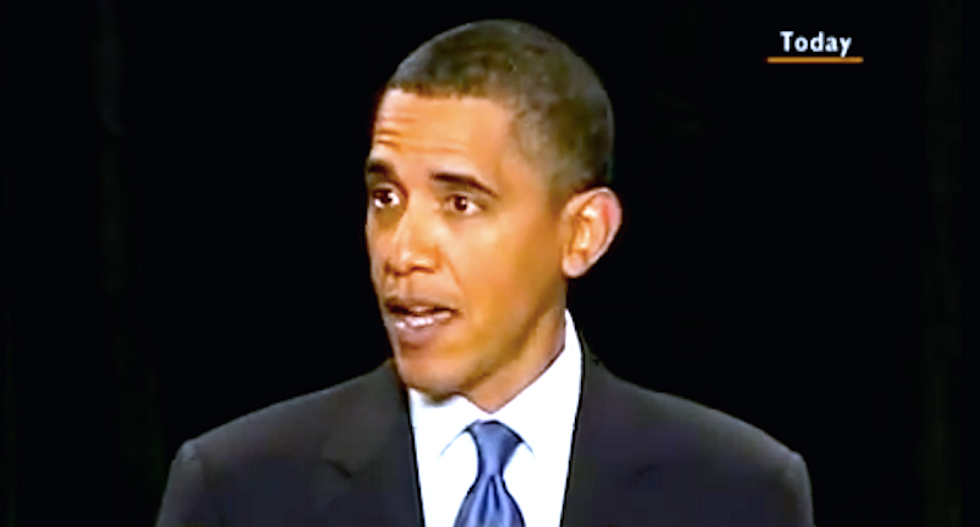 As President Donald Trump spends the morning attacking the New York Times for reporting he seemed "confused" about the Republican health care bill -- it's worth remembering that his predecessor spent hours fielding questions from GOP lawmakers on the Obamacare legislation.

President Barack Obama spent more than an hour Jan. 29, 2010, taking questions -- on live TV -- at a House Republican retreat in Baltimore, where he urged GOP lawmakers, including then-Rep. Mike Pence, to "challenge my ideas."

Pence, now the vice president, called Obama's economic agenda radical, but the Democratic president slammed the GOP's proposals as farcical and mocked their opposition to his "Bolshevik plot" to extend health care to millions of Americans.

“I am not an ideologue, I’m not,” Obama said. “It doesn’t make sense -- if somebody could tell me, ‘You could do this cheaper and get increased results,’ then I would say, ‘Great.’ The problem is, I couldn’t find credible economists who could back up the claims that you just made.”

He urged GOP lawmakers to tone down their rhetoric in hopes of reaching more bipartisan agreement, because he said their opposition offered little room for compromise.

"The fact of the matter is, is that many of you, if you voted with the administration on something, are politically vulnerable in your own base, in your own party," Obama said. "You’ve given yourselves very little room to work in a bipartisan fashion because what you’ve been telling your constituents is, this guy is doing all kinds of crazy stuff that’s going to destroy America."

Obama also challenged claims from Tom Price, then a Georgia congressman and now secretary of Health and Human Services, who complained the president hadn't listened to Republican proposals.

"I am absolutely committed to working with you on these issues, but it can’t just be political assertions that aren’t substantiated when it comes to the actual details of policy," Obama said. "Because otherwise, we’re going to be selling the American people a bill of goods. I mean, the easiest thing for me to do on the health care debate would have been to tell people that what you’re going to get is guaranteed health insurance, lower your costs, all the insurance reforms; we’re going to lower the costs of Medicare and Medicaid and it won’t cost anybody anything. That’s great politics, it’s just not true."

Obama assured Price and Rep. Paul Ryan (R-WI), now the House Speaker, that'd he had read their legislative proposals -- and he displayed a clear understanding of the details of both parties' plans.

"When we made a very modest proposal as part of our package, our health care reform package, to eliminate the subsidies going to insurance companies for Medicare Advantage, we were attacked across the board, by many on your aisle, for slashing Medicare," Obama told Ryan. "You remember? We’re going to start cutting benefits for seniors. That was the story that was perpetrated out there — scared the dickens out of a lot of seniors."

The event drew widespread praise from pundits and lawmakers, although Republicans conceded it was probably a "mistake" to let cameras roll -- and Obama's performance was so effective that Fox News cut away from their own live feed about 20 minutes before the end.

By comparison, Senate Republicans walked away from their closed-door meeting Tuesday with Trump complaining that the current president "did not have a grasp of some basic elements of the Senate plan — and seemed especially confused" that it could be attacked as a tax cut for the wealthy, according to one GOP staffer.

“If we don’t get it done it’s just going to be something that we’re not going to like, and that’s OK, and I understand that very well,” Trump said Tuesday, before reporters were asked to leave the White House meeting.

Obama's televised meeting in 2010 with House Republicans went so well, in fact, that the White House scheduled an even longer event involving lawmakers from both parties about a month later.

"Obama dominated the debate during Thursday's nearly seven hour cross-party summit on healthcare, always in command not only of the room but also of the most intricate policy details, as he personally rebutted every point he disagreed with," wrote Caren Bohan, White House correspondent for Reuters, about the Feb. 25, 2010, event.

The televised event convened nearly 40 Democratic and Republican lawmakers at the Blair House, across from the White House, and Obama sparred with conservatives despite warning participants against turning the discussion into "political theater."

"We don't care for this bill," said then-Rep. Eric Cantor (R-VA), the House Minority Whip at the time, as he sat behind a copy of the 2,700-page Democratic bill.

Obama accused Cantor of using the stack of papers as "a prop," and argued that health care legislation could not be simplified.

"The truth of the matter," Obama said, "is that healthcare is very complicated."

Obama asked GOP lawmakers to make a serious effort to offer amendments that the Democratic majority might consider, but he said they wouldn't wait forever to vote.

"The question that I'm going to ask myself and I ask of all of you is, is there enough serious effort that in a month's time or a few weeks' time or six weeks' time we could actually resolve something?" Obama said. "And if we can't, then I think we've got to go ahead and make some decisions, and then that's what elections are for."

Obama, during the hours-long meeting with lawmakers, offered a criticism of Republican efforts that remains relevant as the GOP majority attempts to undo Obamacare's protections seven years after its passage.

"I'd like the Republicans to do a little soul searching and find out are there some things that you'd be willing to embrace that get to this core problem of 30 million people without health insurance, and dealing seriously with the preexisting-condition issue," Obama said in February 2010.

Then-Sen. Jon Kyl (R-AZ), the Senate Minority Whip at the time, complained afterward that Obama had talked too much.

"I just don't think the president was listening," Kyl said.