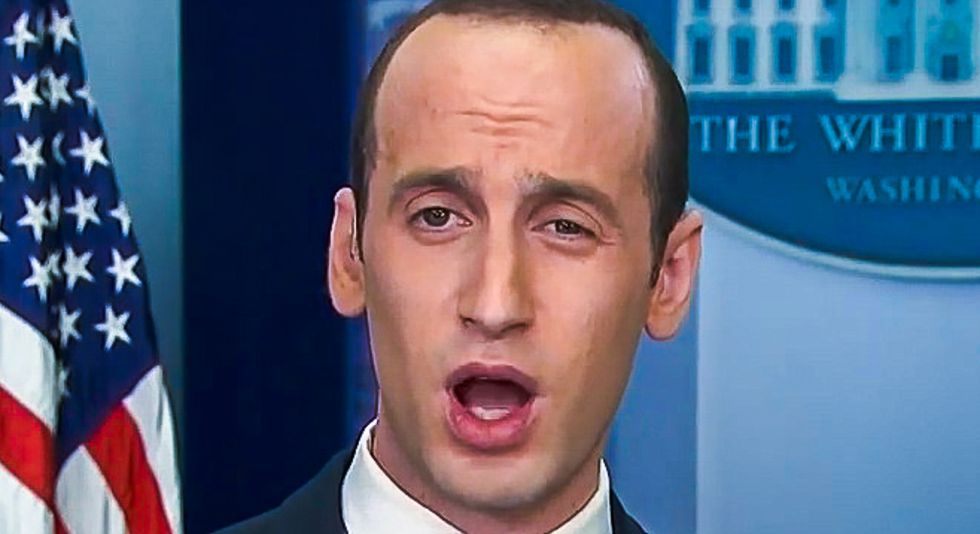 Two studies President Donald Trump hopes will buttress his case to cut the number of refugees are at the heart of a fight between senior White House adviser Stephen Miller and career U.S. government officials over immigration policy, four current and former officials said.

Trump in March ordered the U.S. State Department and other agencies to tally only the costs of resettling refugees but not the benefits that policy experts said refugees can also bring, including tax revenues, professional skills and job creation.

A current official said Miller had convened meetings with State Department staffers to discuss the refugee cost reports. When department specialists proposed including refugees' economic contributions in the studies to produce a more balanced assessment, Miller rebuffed the idea, one current and one former U.S. official said.

The White House said Miller did not hold meetings on the specific subject of the cost reports and that Trump's overall fiscal year 2018 budget proposal sought to "make transparent the net budgetary effects of immigration programs and policy."

The current and former officials, who spoke on condition of anonymity, said that they believe, however, the administration wants to help make a case to restrict refugee flows by creating a skewed analysis.

"It's a policy outcome in search of a rationale," said a former U.S. official familiar with the debate.

The White House disputed the notion that Miller was seeking to tailor the outcome of the reports, which are to be compiled mainly by the State Department's Bureau of Population, Refugees and Migration (PRM).

"The idea that we are ordering biased reports is false," said Michael Short, a White House spokesman.

The tensions over the reports, due in September, have not been previously reported.

Miller has a history of backing curbs on immigration. He was the architect of Trump's order in January suspending the refugee program for 120 days and refugees from Syria indefinitely. That order, which also temporarily barred travelers from seven Muslim-majority countries, was largely blocked by the courts, as was a second executive order.

Miller was not available for an interview. The State Department did not respond to a request for comment.

Tensions in the government over Trump's immigration policies began with Trump's executive order, which prompted about 900 State Department employees to sign an internal memo dissenting against the executive order in January.

Weeks later, the right-wing Breitbart website, which has close ties to the White House, published a story calling for the firing - among others - of the two top officials in the Department of Health and Human Services' Office of Refugee Resettlement and three senior officials at the PRM bureau.

Breitbart listed the officials by name, but it did not mention the reports on refugee costs. Career officials cannot be fired, but can be reassigned. There is no evidence the five have been reassigned.

Trump promised a hardline immigration policy during his 2016 presidential campaign. He called at one point for a complete ban of Muslims entering the United States, citing security reasons amid a series of attacks worldwide by Islamist militants.

For the first report, Trump ordered a tally of "the estimated long-term costs of the United States Refugee Admissions Program at the Federal, State, and local levels, along with recommendations about how to curtail those costs."

Trump directed that the second report estimate "how many refugees are being supported in countries of first asylum (near their home countries) for the same long-term cost as supporting refugees in the United States, taking into account the full lifetime cost of Federal, State, and local benefits, and the comparable cost of providing similar benefits elsewhere."

Refugee policy experts said that while more refugees can be supported in third-country camps for a given sum than settled in the United States, that support does not provide a permanent solution as resettlement can.

Most studies show that refugees entering the United States require more government services than immigrants as a whole.

But scholars differ over the long-term economic impact of accepting refugees, which can depress low-skilled workers' wages and require all workers to help pay for social services that refugees receive.

During their first eight years in the United States, refugees receive more in benefits than they pay in taxes, a study published this month by the nonprofit National Bureau for Economic Research said.

"After the eighth year, taxes paid tend to be greater than the benefits received," by an average of $21,000 over a 20-year period, the study found.

Jessica Vaughan of the Center for Immigration Studies, which favors limiting immigration, agreed that accountings such as those Trump ordered should not be limited to costs.

"It's only fair to consider any fiscal benefits," she said.

The four current and former U.S. officials said the high-level White House focus on the reports has sent a clear signal about the outcome Trump wants.

"When the White House calls and expresses interest...in a report of this nature, given all the things that the national security council and people around the president have to worry about, that sends an enormously profound signal to the bureaucracy," one of the former officials said.