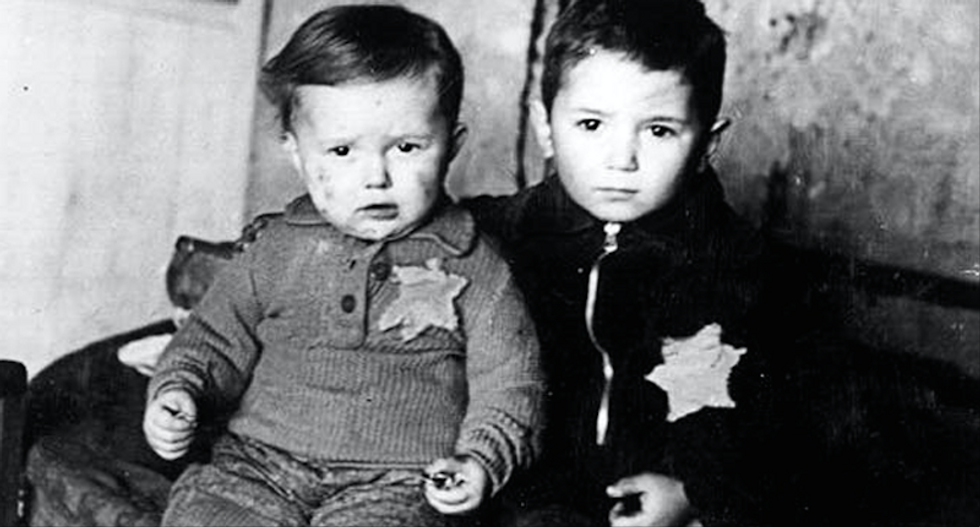 Five year old Avram Rosenthal and two year old brother Emanuel of the Kovno ghetto in Lithuania are shown. Both boys were later deported to the death camp at Majdanek, where they were murdered. (United States Holocaust Memorial Museum)

My new book, The Crime of Complicity: The Bystander in the Holocaust, is a personal journey exploring my parents’ Holocaust experiences. My mother survived the war hiding in a Budapest attic; my father survived both a mining-work camp in Yugoslavia (Bor) and a forced march from which he escaped when Tito’s partisans ambushed the German soldiers.

In addition to researching how they survived, something I knew very little of as a child, the book addresses the role of the bystander – in particular, the complicity of the bystander. I firmly believe that bystander non-intervention enhances victim vulnerability and facilitates perpetrator evil. It is for that reason that I advocate legislation criminalizing bystander non-intervention and am working with a member of the Utah legislature in this effort.

Non-intervention is a conscious decision. The bystander, to meet my proposed definition, must know the victim is in distress and be in a position to alert the proper authorities. There is no need for actual, physical intervention. Innumerable reasons are proffered as to “why not.” I, too, have been guilty of this. I have excuses, none particularly compelling or convincing.

The bystander is a recurring theme in history. The consequences are inevitably tragic. To wit: Pictures of lynchings graphically and convincingly illustrate crowds, enjoying their picnics, surrounded by their children as an African American is brutally murdered. While those iconic and infamous pictures also show the local sheriff casually observing mob rule, my focus is not on individuals in positions of power. They are not bystanders; they are guilty of other crimes including dereliction of duty, if not accomplices to murder.

For a previous writing project, I interviewed a distinguished academic whose beloved grandfather participated in lynchings. She explained to me that her grandfather adored her; she adored him. However, when the truth of his past came to her attention she was repulsed. I assume her anger would be mitigated had he been “in the crowd” watching others murder a fellow citizen.

While researching my present book, I met with children of bystanders who watched the Jews of Maastricht in the Netherlands make their way to the train station to be deported. One was adamant that her father bore no guilt as “he could do nothing”; the second was overcome with emotion when realizing her father’s inaction was akin to that of the bystander. She recalled in painstaking detail taking leave of her Jewish classmates and neighbors who were murdered in Auschwitz. Their faces adorn her kitchen wall.

The same cruel fate awaited my paternal grandparents. Their walk from home to the train station was, as I have come to learn, marked by taunting, hitting, jeering by their soon-to-be erstwhile neighbors. Not one offered solace or assistance. The same combination of taunting accompanied my father as he and three other liberated prisoners walked 136 km to safety in the dead of winter. No one offered them provisions.

I offer this not to suggest that Yugoslav (they walked through present-day Serbia to Bulgaria) villagers were responsible for their travail but rather to present a compelling historical story from which we can learn much. Simply put: one of the profound lessons I learned while researching this book is that the evil of the Nazis was facilitated by the millions of bystanders. For me, that is not an abstract concept; rather, it is concrete and personal.

The idiom of failing to learn from history is oft-repeated, yet, tragically, not always applied. The book talks I have given since the book’s release have been marked by three important patterns:

● A remarkably wide range of attendees’ ages, 15 to 85 years old

● Powerful questions regarding the bystander today

I have been asked whether the current American political climate was “in the back of my mind” when writing my book. The answer is a loud and resounding “NO.” I am not a prophet. However, I do believe that we—individually and collectively—must ask ourselves two questions: what do learn from the consequences of bystander non-intervention 75 years ago and how is that lesson to be applied in 2017?

For me, the answers are remarkably clear and simple: To minimize, if not prevent a recurrence—regardless of degree—we must engage each other and our leaders in a loud, consistent manner in accordance with the finest and time-honored manner of a civic and civil democracy. Exercising the right to vote is obvious (failure to do so is unacceptable); speaking truth to power is essential; understanding that today’s bystander is tomorrow’s victim is a theme that repeats itself; and most importantly that we owe a legal duty to intervene on behalf of another human in distress.

On June 14, 2016, I re-traced my grandparents’ horrible walk of May 26, 1944. I did so with the invaluable assistance of a Hungarian genealogist. My emotions ran the expected gamut. However, the OVERWHELMING emotion was: how could it be that NO ONE offered any assistance. That is the essence of the bystander. That same powerful, overwhelming emotion would be, I am convinced, akin to what descendants of an innocent American strung to a tree would feel were they to visit the spot where their relative was brutally murdered.

With those two awful visions in my mind, I am convinced that the effort to legislate bystander non-intervention is the obvious lesson history offers.

Amos N. Guiora is Professor of Law at the S.J. Quinney College of Law, the University of Utah and Lieutenant Colonel (Ret.) in the Israel Defense Forces. His latest book is The Crime of Complicity: The Bystander in the Holocaust (2017).