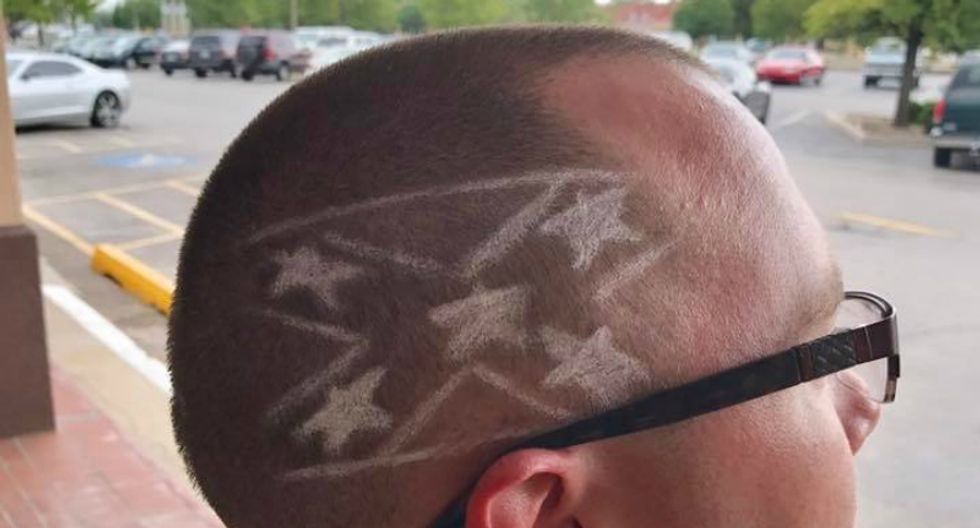 The "fade"-style haircut given to an Oklahoma man featuring a Confederate flag (image via barbershop owner Corey Sutter/Facebook).

After an image of a white Oklahoma man with a Confederate flag shaved into his hair went viral, the black barber behind the curious 'do took addressed it when speaking to the press.

“I was thinking it was some racist-type stuff but, as he sat down and I was doing it and he was talking to me the whole time, and he explained to me why he was doing it, like, he was a really cool guy and I didn't feel like he was racist at all,” Demontre Heard, a barber at Oklahoma City's Fade N Up, told OKC's KFOR News.

“When he came in, he explained to me that it was because of his favorite rapper,” Heard said.

He also said that he strives to provide the best service he can to customers regardless of race.

“If you're white, Asian, Mexican, Black, Puerto Rican, whatever, you sit in my chair and I cut your hair, I hope I leave you with the best haircut you get and I hope that you come back,” Heard said.

Corey Sutter, the shop's owner, had a similar take on the issue.

“When they came in, we kind of thought it was odd. You know, like really? But like, with me and my barber crew, we're so far past racism. We know it exists, but we don't pay it no attention because, once you start paying attention to the problem, it's like they won," Sutter, who posted the photo on his personal Facebook account, said.

Sutter also said he's not pleased with the backlash, which has included condemnation of the black-owned barbershop.

"The thing that's really bothering me is, no matter how it may look to someone and them getting upset about it, this is what we do for a living,” Sutter said. “We provide a service for this person, and that's what we're supposed to do. Yeah, we could have denied it. Yes, we could have acted a fool and talked bad to him, tried to fight him or anything like that. But, he came in, he came in respectful. He wanted it.”

You can see the haircut and Sutter's commentary on it below, via Sutter's Facebook.