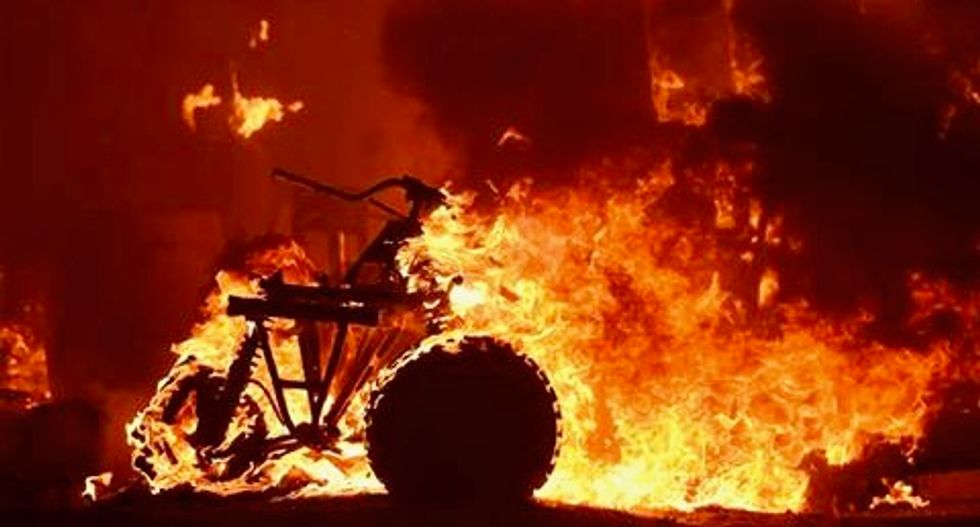 A fast-growing California wildfire has forced about 5,000 residents from their homes and nearly doubled in size as about four dozen major blazes scorch the U.S. West, authorities said on Wednesday.

More than 2,000 firefighters have contained just 7 percent of the Detwiler fire, which is threatening tiny communities in the foothills of the Sierra Nevada mountains, the Cal Fire state agency said on its website.

The blaze has mushroomed to 46,000 acres (18,000 hectares) since Tuesday and is threatening 1,500 structures. Firefighters are facing "extreme and aggressive fire behavior" with solid walls of flame and sparks from the main blaze setting secondary fires, Cal Fire said.

Flames have destroyed eight structures and threaten 1,500 while homes and businesses were ordered evacuated southwest of Yosemite National Park. The fire is threatening power lines to the park, Cal Fire said.

Mariposa's 2,000 residents were told to leave the town on Tuesday, after its power and water links were damaged, news reports said.

Dan Ostler, a Mariposa business owner, said he was staying behind to offer fire crews bathrooms and water. "It's something I want to do, I can do. I've got my escape route planned," he told Sacramento's KOVR television.

Smoke pouring from the Detwiler fire has drifted as far northeast as Idaho, according to satellite photos from the National Oceanographic and Atmospheric Administration.

The California blaze was among 46 active large fires spread across 12 western states as of Tuesday, according to the National Interagency Fire Center's website.

Dry and windy conditions have intensified the wildfires and thousands of people have been evacuated, including in neighboring Oregon and Nevada.

Cal Fire did not report any injuries from the Detwiler fire as of Wednesday morning.

Governor Jerry Brown declared a state of emergency for Mariposa County on Tuesday, dispatching resources to the area, as the fire was approaching.

(Additional reporting by Al Golub in Mariposa, Brendan O'Brien in Milwaukee and Ian Simpson in Washington; Editing by Raissa Kasolowsky and Tom Brown)