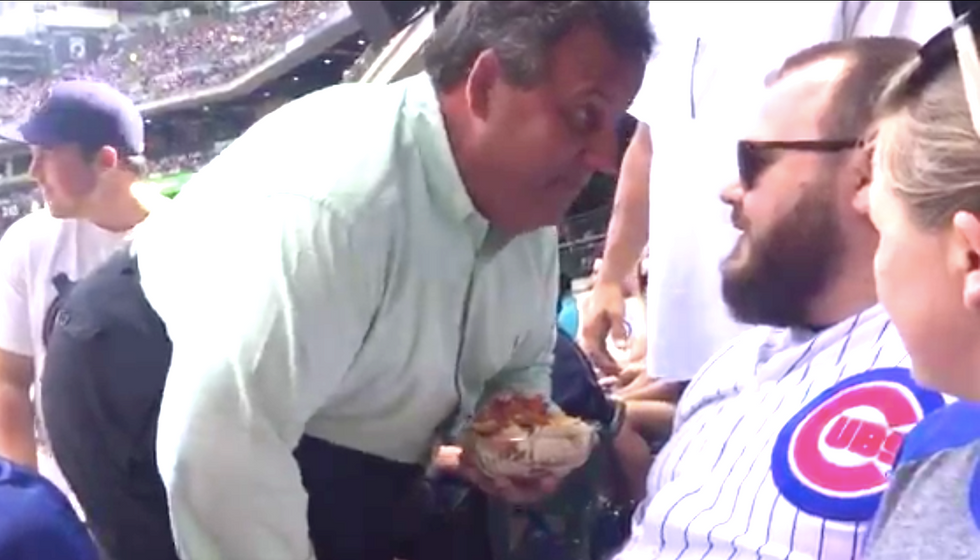 New Jersey's historically unpopular Gov. Chris Christie got inches away from man in an angry confrontation at a baseball game on Sunday.

The Hill reported that Christie was getting "razzed" by audience members in the stands at a Milwaukee Brewers game in Wisconsin. Cameras caught him leaning down to angrily say something to one of the men.

Red-faced and carrying what appeared to be a loaded hot dog, Christie apparently asked the man -- who was wearing a Chicago Cubs jersey -- whether he wanted to "act like a big shot" and then told him to "be careful."

Christie's son works for the Milwaukee Brewers, the Hill said.

In early July, Christie earned nationwide scorn and derision after he and his family were photographed enjoying a beach that was closed to the public due to a spat between Christie and Democratic lawmakers.

His own Lt. Gov. Kimberly Guadagno called the decision to use the beach "beyond words."

Christie is currently the U.S.'s most unpopular governor, turning in job approval numbers so low that -- in the words of Rachel Maddow -- they "look more like shoe sizes."

His term ends in January.