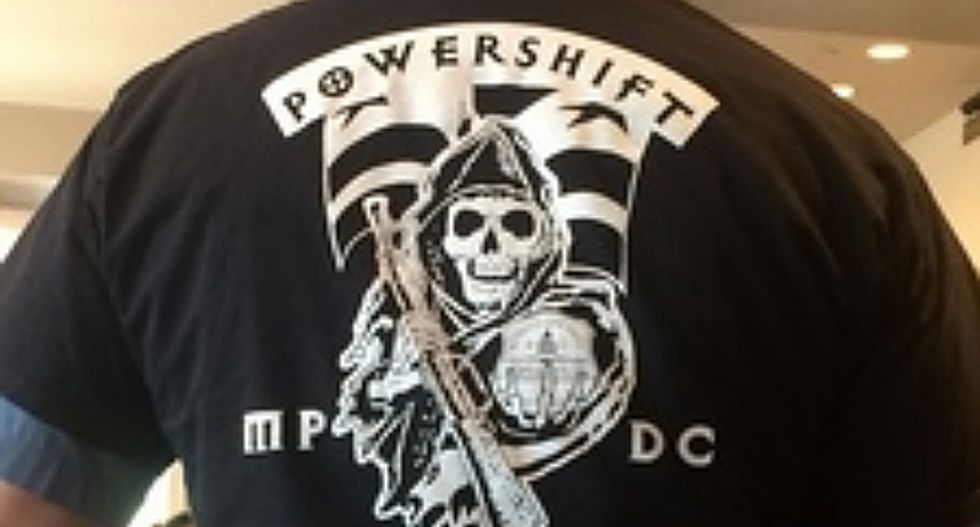 Offensive t-shirt allegedly worn by multiple officers of the Seventh District of the Metropolitan Police Department in Washington, DC

Washington, DC police are in full damage control after a police cop was photographed wearing a racist t-shirt while on duty.

Officer Vincent Altiere was photographed in DC Superior Court – while on duty – wearing a shirt with a white supremacist "Celtic cross" and a grim reaper sporting a badge for the Metropolitan Police Department of Washington, DC, The Washington Post reports.

"The shirt displays a “sun cross” (replacing the letter “O” of “PowerShift”), a well-known and notorious white supremacist symbol adopted by the Ku Klux Klan and other white supremacist hate groups," claim Law 4 Black Lives activists who want the officer fired. "Immediately below is the image of the Grim Reaper, a personification of death in the form of a hooded skeleton, holding an assault rifle and a Metropolitan Police Department badge."

Police Chief Peter Newsham said, "this is disgraceful and does not represent the hard working and committed officers of the Seventh District.

But the activists who documented the police officer wearing the offensive shirt are not sure Chief Newsham is correct in his assertion.

"Given the prominent placement of MPD logos and a badge number, the shirt does not appear to be attributed to Officer Altiere alone, but instead, appears to have been designed for a group of officers associated with the MPD Seventh District," Law 4 Black Lives DC noted. "This shirt is offensive and indicates systemic bias in the policing of people of color."

Stop Police Terror Project D.C. organizer Eugene Puryear also told The Post that officers have been spotted wearing the shirt over their uniforms while waiting to testify.

"I don’t think someone should have a badge and a gun or the ability take someone’s life or arrest them if they may be harboring these kind of white nationalist viewpoints,” Puryear told WTOP. “What is MPD really doing to root out these kind of attitudes if an officer or officers could not only make this shirt but wear it on duty?”

Officer Altiere has been placed on non-contact status pending investigation.