Democrats 'are in a constant state of psychotic rage': Fox host has a meltdown when Rep questions Trump staff choice 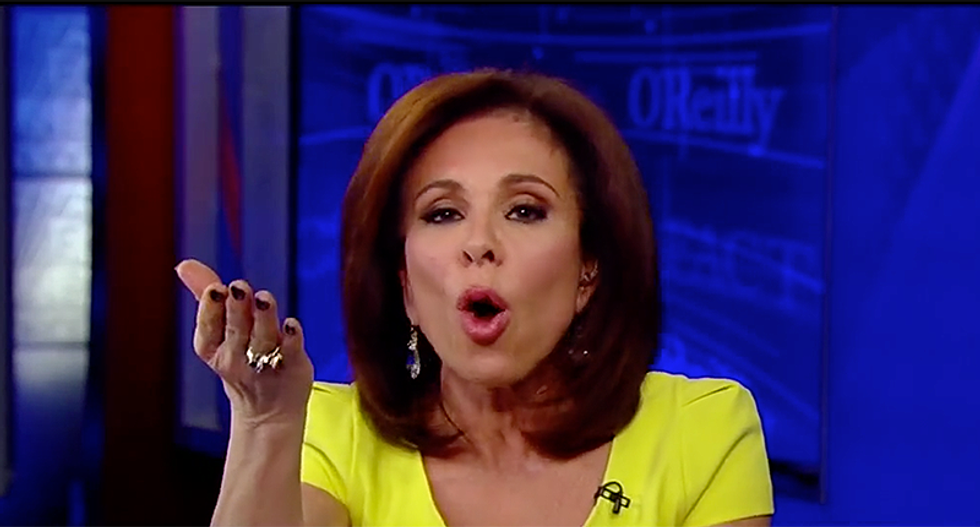 Fox News host Judge Jeanine Pirro began her Sunday show alleging that Democrats "are in a constant state of psychotic rage." She used protests at Berkeley and speeches by Hollywood celebrities to attack Rep. Barbara Lee (D-CA) for recent comments about Trump choosing Gen. John Kelly as his new chief of staff.

Lee tweeted out concern that Trump putting so many generals in power was a concerning characteristic of someone "militarizing" the White House.

"I come from a military family. My dad served in World War II and Korea, and so I respect and honor the military, and recognize the sacrifices that all of our military men and women make, as well as Gen. Kelly and his history and his sacrifices," Lee told CNN's Jake Tapper in an interview.

"What I'm talking about is his tenure as Homeland Security Secretary and the very extreme policies of promoting family dislocation, deportation of innocent men, women and children, breaking up families, promoting a Muslim ban, promoting a wall between the United States and Mexico. Those are extreme policies," she said.

Former press secretary Sean Spicer clutched his pearls and called the comment "offensive." Taking a cue from a Breitbart News story, Pirro claimed that the comment was somehow unpatriotic and brought up Lee's celebration of students preventing Milo Yiannopoulos from speaking at UC Berkeley. She then alleged that Lee was the "only member of Congress to vote 'no' on the use of military force against terrorists after the Sept. 11 attacks."

There's one problem with that comment, however, the daughter of an Army Lieutenant Colonel overwhelmingly supported military action against the terrorists responsible for 9/11. In fact, she voted for a bill in the wake of 9/11 that "supported the determination of the President—in close consultation with Congress—to find justice for the victims and to punish the perpetrators and sponsors." According to a memoir, Lee voted against a bill that would have allowed George W. Bush to attack any country he decided was aligned with the terrorists.

Bush later went to war with Iraq, claiming that they had weapons of mass destruction and were involved in 9/11. They weren't involved and they didn't have WWMD. Just shy of 15 years later, the United States is still engaged in conflict there and another arm of extremists have taken over the war against the west.

Lee feared Bush going into whatever war he wanted and distracting the U.S. from the war on terror. It's exactly what ultimately played out. As of today, 16 years after 9/11, the authorization for war has never ended. So, Lee proposed an amendment to the annual defense appropriations bill that would remove the blanket authorization for war that could still be used by President Donald Trump today. Republicans even supported it.

Trump has surrounded himself with military leaders as advisors for issues outside of the military. He boasts that he loves the generals and even claimed his recent decision to ban transgender soldiers from the military was with consultation with generals. The problem we now know is that no generals seem to be able to confirm they spoke to Trump.

As former intelligence officer Malcolm Nance explained to Joy Reid Sunday, military brass fall in line behind the commander, whether it be a higher-ranking officer or the commander in chief. That's what Trump likes.

Watch the meltdown below:

.@JudgeJeanine: "Will someone please tell me why it is that ever since Donald Trump became president, you Democrats… https://t.co/zhd0gjVJXh
— Fox News (@Fox News)1501429522.0