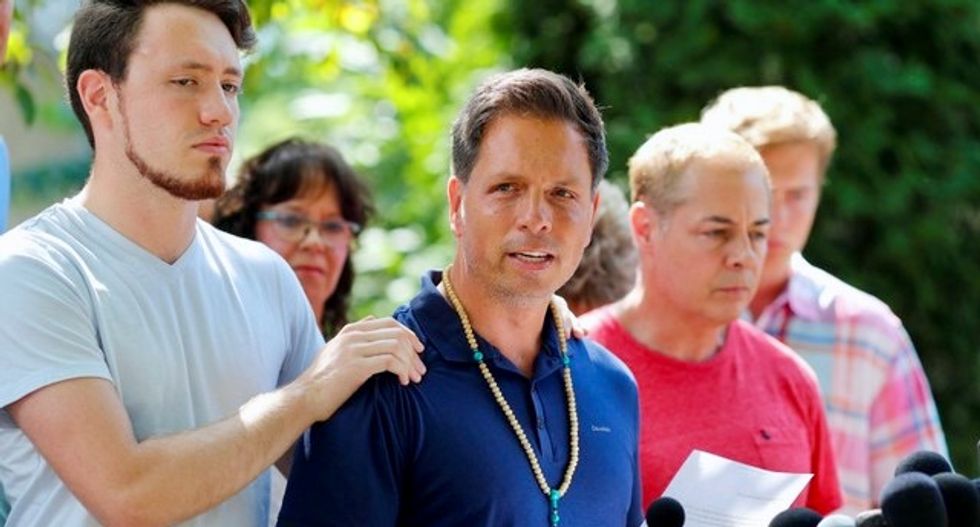 Don Damond is comforted by his son Zach Damond as he speaks to the media about his fiance, Justine Damond who was fatally shot by Minneapolis police in Minneapolis, Minnesota, U.S., July 17, 2017. REUTERS/Adam Bettcher

The father of an Australian woman fatally shot by a Minneapolis police officer over the weekend called for justice on Tuesday hours after a local medical examiner ruled that her death was a homicide.

A Minneapolis police officer shot Justine Damond, originally from Sydney, through the door of a patrol car as she approached him and his partner in an alley near her home shortly before midnight on Saturday, according to the Minneapolis Star-Tribune reported, citing three unnamed sources.

Damond's father, John Ruszczyk, told reporters in Sydney on Tuesday that her death was "our worst nightmare".

"Justine was a beacon to all of us. We only ask that the light of justice shine down on the circumstances of her death," he said.

The Hennepin County medical examiner said in a report issued on Monday evening that Damond died of a gunshot wound in the abdomen and concluded that her death was a homicide.

Authorities and activists on Monday questioned why Minneapolis police who fatally shot her did not have their body cameras turned on during the incident.

Justine Damond's American fiance also wondered about the details of how she was shot. She had called the police to report a suspected sexual assault near her home, fiance Don Damond told reporters outside the home.

"We lost the dearest of people and we are desperate for information," Damond said. "Piecing together Justine's last moments before the homicide would be a small comfort as we grieve this tragedy."

Also known as Justine Ruszczyk, she had already taken Damond's last name. Damond owned a meditation and life-coaching company, according to her personal website.

Minneapolis Mayor Betsy Hodges and the American Civil Liberties Union (ACLU) of Minnesota called for answers on why the two responding officers failed to turn on their body cameras when they arrived at Damond's home in a quiet, upper-middle-class neighborhood shortly before midnight on Saturday.

The officer who shot Damond was identified by the Minneapolis Star Tribune and other local media as Mohamed Noor.

Noor's lawyer, Tom Plunkett, said in a statement that Noor extends his condolences to Damond's family. The statement did not describe Noor's role in the shooting, and authorities have not confirmed the identities of the officers involved.

Hundreds took to the streets of Minneapolis on Sunday to protest Damond's shooting.

The state Bureau of Criminal Apprehension (BCA), which reviews shootings involving the police in Minneapolis, said the dashboard camera in the officers' patrol car did not capture the shooting. The BCA is seeking any civilian video of the incident and said the officers have been placed on administrative leave.

(Reporting by Brendan O'Brien in Milwaukee; Editing by Chizu Nomiyama)