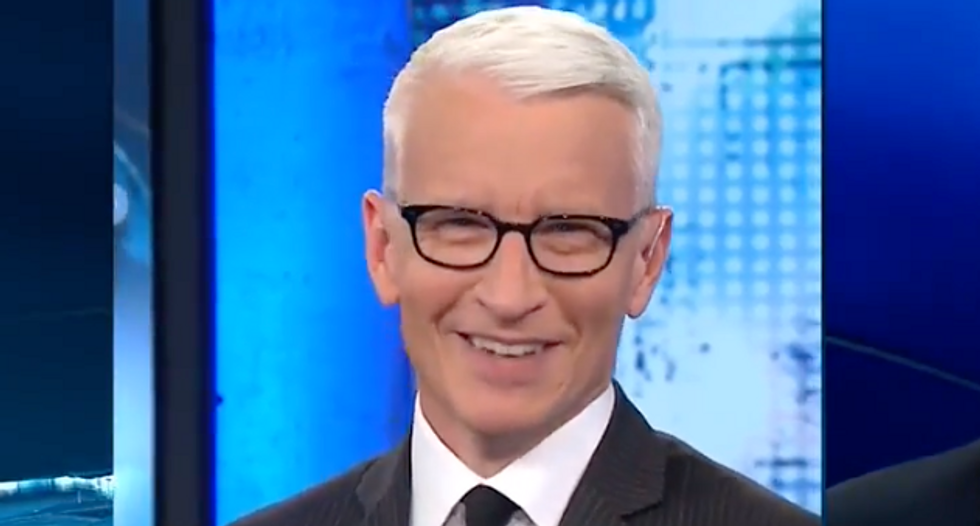 CNN’s Anderson Cooper on Monday railed against White House Press Secretary Sean Spicer for his claim there’s no evidence the meeting between Donald Trump Jr., Jared Kushner, Paul Manafort and a Russian emissary was about anything other than adoption, calling the assertion “demonstrably false.”

“We begin with strange and conflicting accounts from the White House on that meeting Donald Trump Jr. had with the Russian lawyer,” Cooper began, referring to the now-infamous June 2016 meeting between top Trump campaign aides and Russian operatives with ties to the Kremlin.

“President Trump today, again, trying to justify and explain away the meeting,” Cooper said, displaying the president’s early-morning tweet that insisted “Most politicians would have gone to a meeting to get information on a opponent.”

“Never mind that [Trump] ran on being a non-politician after draining the swamp of Washington politics as usual,” Cooper said. “But what makes the statement even stranger is that later today, during another no-cameras-allowed press conference, Sean Spicer gave an explanation for that meeting that's flat-out false.”

Spicer on Monday asserted—despite significant evidence to the contrary—that “there was nothing that as far as we know that would lead anyone to believe there was anything except for discussion about adoption and the Magnitsky Act.”

“That answer? It ignores the chain of emails Donald Trump Jr. himself released under pressure, saying the meeting was about information on Hillary Clinton provided by the Russian government,” Cooper explained. “As if all the revelations this past week about who was at the meeting, who they claimed to represent and what was said simply never happened at all. That defense didn't even work two Saturdays ago—it started crumbling the next day. Tonight, just demonstrably false.”

“The president's own tweet from this morning, even that contradicts Spicer’s alternative history,” Cooper said, referring to the president’s assertion that every politician would have taken the meeting.

“Frankly [Trump’s] been saying the same thing for days now and his son’s been talking too, admitting it wasn't about adoption and sanctions,” Cooper continued. “The meeting was sold to him as a chance to obtain 'official documents and information to incriminate Hillary and her dealings with Russia and would be very useful to your father. This is obviously high level and sensitive information but is part of Russia and it’s government support for Mr. Trump.'”

“[Spicer] spoke as if the emails don't exist and we haven't seen them,” Cooper added.