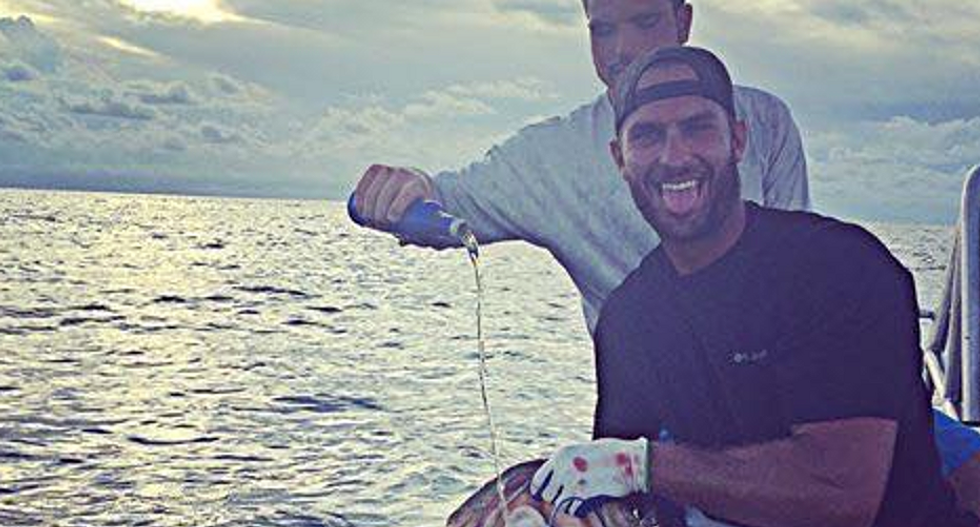 The men who recorded themselves dragging a shark at “high speed” have previously documented themselves torturing other animals, the New York Post reports.

In one image -- posted on Facebook by an outraged citizen -- two men identified as Bo Benac and Nicholas Burns Easterling pour beer in the mouth of a large grouper. The driver of the boat from the “high speed” video is identified in the post as Michael Wenzel.

“This is one of the evil POS that dragged the shark,” the post reads. “His mother is a Manatee County commissioner. Look what he and his friend are doing to this beautiful grouper who was probably 50 years old. #notfunny”

According to the Miami Herald, Wenzel was previously investigated in 2015 after federal and state officials obtained pictures of him holding a pelican and gull. Wenzel reportedly posted those photos on Facebook. Wenzel’s Instagram also featured a video of him shooting a gun at an air-breathing tarpon.

As the Post reports, an online petition demanding punishment for the mens’ “sociopathic behavior” has begun circulating. As of publication, over 9,000 people have urged a criminal investigation and the permanent revocation of their fishing licenses.

Fish and Wildlife Conservation Commission (FWC) officials Tuesday announced an investigation into the viral video, but declined to confirm the men’s identities.

Watch the disturbing video below: