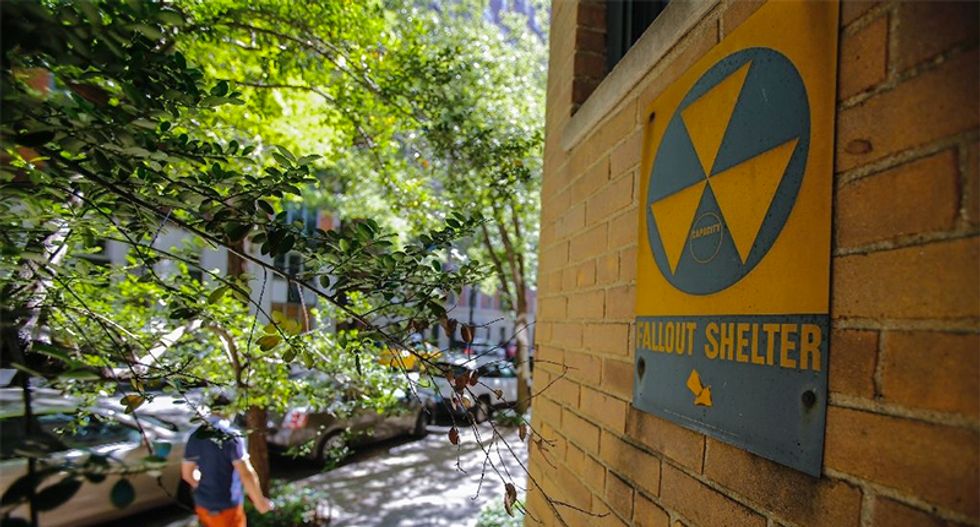 Missiles raining down on New York?

Experts say North Korea's latest test of an ICBM means the Big Apple could be within range of such an attack -- an idea that is surreal for young people but a reminder for older folks of the nuclear bomb shelters that remain all over the city.

Nuclear holocaust wasn't quite at the forefront of people's thoughts this weekend in America's biggest city, which boasted more than 17,000 bunkers at the height of the Cold War.

Many of those born at the end of the Soviet era or after found it difficult to conceptualize a scenario in which they would be under imminent threat.

"We have a base in South Korea and there's an antimissile defense so I'm not overly concerned," said Peter Chang, who was born in Taiwan but grew up in the US. "I actually think they're kind of bluffing."

"I don't know that that threat is necessarily that real," added Rosa, a 26-year-old New Yorker who gave her first name only.

Her friend Allan, also 26, chipped in: "The threat is not super impressive in my mind. I'm not worried that tomorrow North Korea will attack."

Older residents generally had a more somber reading of the facts, influenced by the decades-long nuclear standoff between the West and the Soviet bloc when public service messages, drills, and fallout shelters were commonplace.

Steven Kovalenko, a 71-year-old mechanic, said Pyongyang's atomic arsenal and expanding missiles program were making him uneasy. "They've been growing and growing. Nobody was saying anything and now they have it.

"People are concerned. There's a lot of concerns, but nobody is doing anything."

Kovalenko added he was worried about North Korea's mercurial leader Kim Jong-Un -- but even more so by his own president, Donald Trump, whose aggressive leadership and unpredictability he said would not help defuse crises.

Sixty-two-year-old David Arthur meanwhile said recent events had taken him back several decades to the bomb drills he would have to perform at age 10 "when all those sirens would go off in the neighborhood."

Former New York state governor Nelson Rockefeller was a keen proponent of fallout shelters and ordered the building of thousands during his tenure.

By 1963, some 17,448 buildings had been identified by the military as nuclear sanctuaries.

They were recognizable by their distinctive signs, with the symbol for radioactivity in black imposed on a yellow background. Dozens remain, but many residents today are clueless about their significance.

Arthur said that a former shelter in the basement of his building had since been converted into a laundry room. It now has several windows looking out on the street, offering little of its former protection.

"This program hasn't been active for several decades so it would not be reliable," said Jeffrey Schlegelmilch, deputy director of the National Center for Disaster Preparedness at Columbia University's Earth Institute.

In recent years, New York has instead preferred disaster response drills, such as the giant "Gotham Shield" exercise that took place in April and involved the setting up of a field hospital inside a sports stadium.

But such simulations envision a scenario in which a suitcase bomb or so-called "dirty bomb" containing radioactive materials is detonated -- not a powerful ICBM.

"I don't think there's any city or region in the country that is fully prepared or that has really been able to walk down the full range of actions that would have to be taken not only in the direct event of a nuclear attack," added Schlegelmilch, who believes the priority for now is greater public awareness.

"How do you get people to engage in a conversation about the threat of nuclear war without it seeming like maybe you're sitting on some information that they don't know about or creating some kind of fear that is unnecessary?" he asks.

"At best we're just starting to have these conversations."

In the Korea Town district in the heart of Manhattan, two young Korean women who now work in the US say they are more worried for their families back home.

Should the hostilities escalate into all-out conflict, it would be South Korea that bears the brunt, not America, said one who did not wish to be named. "We don't want to go to war again."