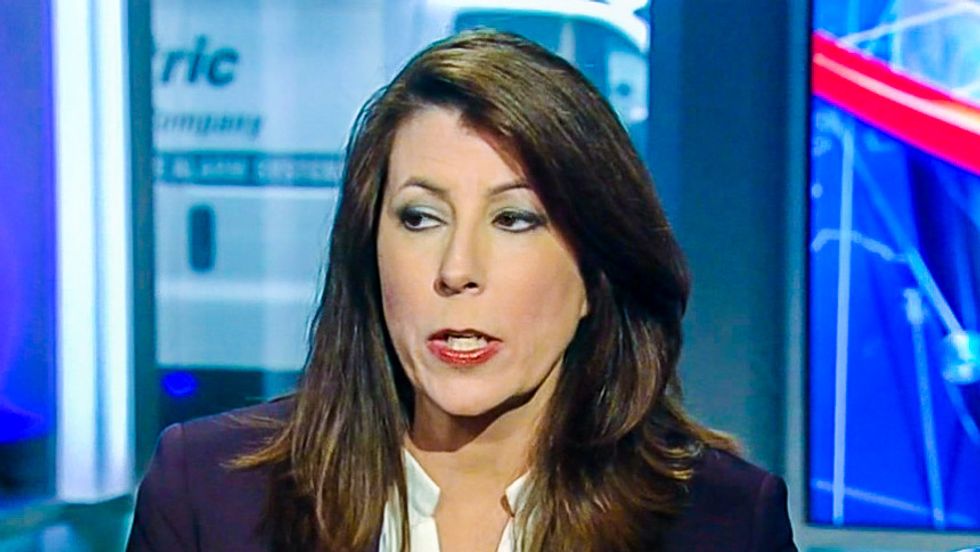 A Fox News contributor who mocked a 10-year-old boy with autism for challenging Vice President Mike Pence has rallied to the defense of a self-admitted Reddit troll who created a violent meme shared by President Donald Trump.

Conservative broadcaster Tammy Bruce bashed CNN for identifying the Reddit user called "HanA**holeSolo" and contacting him for comment, after the president tweeted out the social media he created depicting Trump body-slamming the network.

"They realized they can't quash Trump like a bug, so they went after this private citizen who has nothing to do with Trump," Bruce said Wednesday morning on "Fox and Friends." "(He) made this meme that the president picked up, and they decided that they could get their pound of flesh from this individual."

The CNN report did not identify the man but included an explanation that could be construed as a threat to reveal his name if he continued posting offensive content online.

"Now all of Twitter -- social media, in general -- you've got everybody coming together on this," Bruce claimed. "It's not a conservative or liberal thing -- people have been shocked that they would go after a person like this who has no recourse and no resources to deal with this shocking event."

The man told CNN that he regretted posting racist and anti-Semitic content on Reddit, which he said became addicting, and urged other "trolls" to consider their own actions.

"Their intention was to send a message that 'we will' -- look, they could destroy someone like that, and that was the message," Bruce said. "This, of course, proves President Trump's point that the media is so consumed with their loathing that they can't see past themselves, and they've got to be fed in some manner."

Bruce was forced to apologize in May after calling a child with autism a "snowflake" who needed a "safe space."

She made the remarks on "Tucker Carlson Tonight," where guest host Bill Hemmer showed a viral video of the boy demanding an apology from the vice president for bumping him in the face with his sleeve during an event.

"I guess we're giving birth to snowflakes now, because that looked like that kid needed a safe space in that room," Bruce said.

"It is a bit, the 8-year-old pretty much stalked the vice president afterwards," Bruce continued. "He wasn't even -- the headlines said he was 'hit, he was struck, he was smashed, he was bumped.' The fabric on his sleeve touched his nose, maybe. He stalks the vice president, says, 'You owe me an apology.'" This is like he was channeling [University of Missouri professor] Melissa Click wanting to get some muscle into the room. This is crazy. Now look, he's seen it either on television, maybe he's seen it at home perhaps, but he felt aggrieved because, I don't know, the vice president maybe slightly touched his nose. It's pretty amazing."

Bruce apologized a few days later, after the boy's mother explained to CNN what had happened.

“First of all, I am so sorry to the family," Bruce said. "My intention was never to hurt a kid and his mom. We had absolutely no idea that Michael was on the autism spectrum and, as a gay woman and feminist, I’ve spent my adult life working to improve the lives of women and children and those who are disenfranchised. I get it and I apologize. I also appreciated the boy's mother’s public comments and clarity on this. A main lesson here, no matter intent, is to leave kids out of our political discussions. We certainly agree on this.”