Fox host goes all-in on nationalism: 'One man's nativist is another man's patriot' 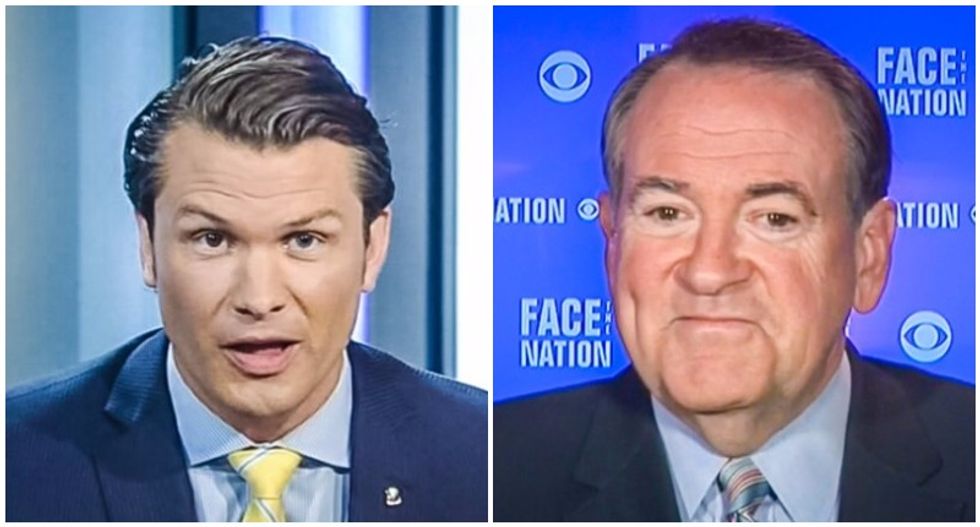 A Fox News host voiced support for xenophobic nationalism during a conversation with Mike Huckabee.

"Fox & Friends" co-host Pete Hegseth was speaking Monday morning to the former Arkansas governor about Sen. Jeff Flake (R-AZ), who said the Republican Party had lost its way to "nativism and protectionism" under President Donald Trump.

"This elitism on the part of the party, that's what's been rejected by many of us Republicans," Huckabee said. "I'm a Republican, but I don't want any part of this idea that we're going to just become globalists and we're going to forget that ultimately our duty is to the United States of America and its tax-paying citizens."

Hegseth said Flake would consider Huckabee a nativist for expressing those views, and the father of the White House press secretary said he had no problem with that.

"Call me whatever he wants -- then he's a globalist, and we'll make that decision," Huckabee said. "But I think the voters of America made the decision that we'd rather be 'America first' than we had globe first because that whole globalist idea is making a handful of people filthy rich and it's making a whole bunch of Americans filthy poor."

Hegseth agreed, and endorsed the ideology that originated in the U.S. more than 150 years ago during a wave of hysteria over Catholic immigration from Germany and Ireland.

It remains the core feature of right-wing radicalism -- and one of the earliest political views expressed by Trump as a presidential candidate.

"That's right," Hegseth said. "One man's nativist is another man's Americanist or patriot."