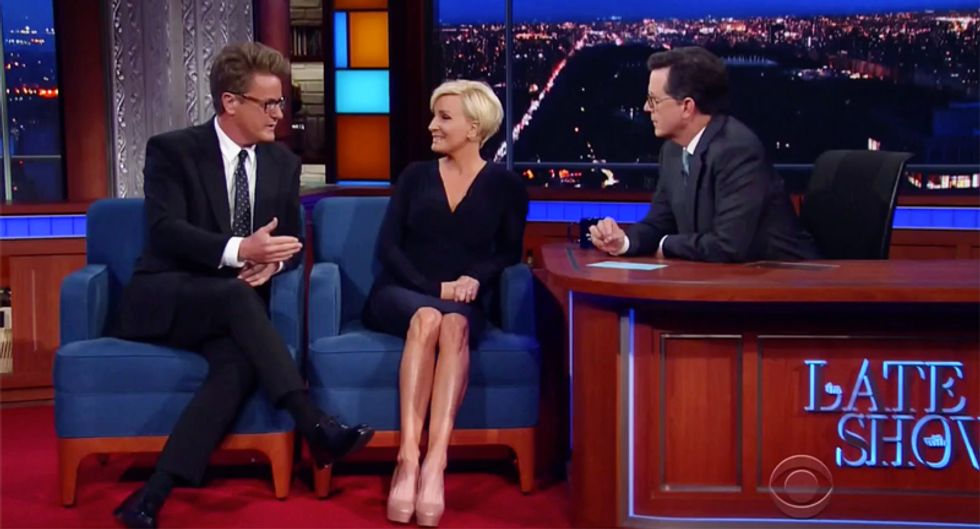 Joe and Mika on The Late Show -- CBS screenshot

Appearing with host Stephen Colbert on the "Late Show" Tuesday night, MSNBC hosts "Morning" Joe Scarborough and Mika Brzezinski unloaded a collection of anecdotes about their longtime friend -- and now adversary -- Donald Trump, with both of them admitting that he has changed for the worse since becoming president.

Addressing the Late Show host, the former GOP lawmaker admitted that he was leaving the Republican Party and becoming an independent.

"I think it's inexplicable," an agitated Scarborough explained "This is well before Donald Trump was elected president that my party has betrayed their core values. "You have to ask yourself, what exactly is the Republican Party willing to do? How far are they willing to go? How much of this country and our values are they willing to sell out?"

Turning to Trump, Scarborough and Brzezinski were even less charitable.

"You know Donald Trump," Colbert began. "You guys wrote in an editorial that this guy you see now is not the guy you knew. What's different? Because this seems exactly like the guy that I have always seen -- he's a primo tool."

"Joe even said during the campaign he could never vote for him" replied Brzezinski, before saying of Trump, "But he used to know he was a tool."

"I i want to be careful how I say this," Scarborough offered. "I've just got to say that people that have known him for a very long time have said over the past year, that he has started to change. I'm not talking about whether he's obnoxious or whatever, but, for instance, when we were on "The Apprentice" one time, he had some golf tournament out at one of his clubs, he was in on the joke."

"I'm saying, though, he at least had more of a concept of what he was doing, the game he was playing," Scarborough continued.

Brzezinski also commented, "I know him well enough to know it's that kind of thing [any criticism] that gets under his skin. He can be played very easily which is very concerning."