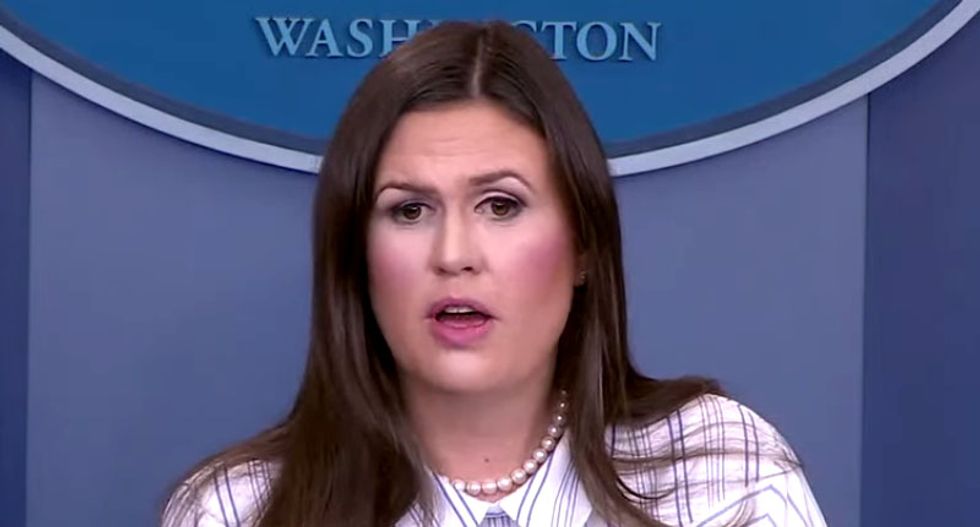 At an audio-only press briefing on Wednesday, White House Deputy Press Secretary Sarah Huckabee Sanders did exactly as MSNBC's Rachel Maddow predicted on Tuesday night and attempted float a manufactured scandal to deflect attention away from the White House.

When asked about President Donald Trump's eldest son and evidence that has surfaced tying him to Russia's attempts to meddle in the 2016 election, Huckabee Sanders tried to insist that the real scandal is collusion between the government of Ukraine and the Democratic National Committee.

"Look, I think we’ve been extremely clear and I know that Don Jr. discussed it at length last night as well as the president’s counsel," she said. "If there’s any evidence of collusion it would be between the DNC and the Ukrainian government."

She continued, "Information passed to the DNC from the Ukrainian government directly targeted members of the Trump campaign."

On her Tuesday night broadcast, Rachel Maddow said, "They will try to turn the narrative to instead be about Hillary Clinton and her campaign, or to otherwise turn the story inside out."

Slate.com explained that the comparison of Russia's contacts with the Trump campaign and contacts between Ukraine's pro-democracy government and the DNC is spurious because "what’s ultimately concerning about Russiagate is the possibility that the Trump campaign -- including staffers now employed in the White House by the president -- worked with a hostile government whose leaders attempted to influence and disrupt the election with cyberattacks."

Whereas in the case of Ukraine and the DNC, Ukrainian embassy officials passed on information about Manafort's criminal activity in their country to a Democratic operative named Alexandra Chalupa -- information that they also openly shared with the press.

"The two episodes are not close to being the same," said Slate's Osita Nwanevu, "but that fact obviously won’t stop Trump’s supporters from deploying the story for yet another round of Clinton whataboutism."