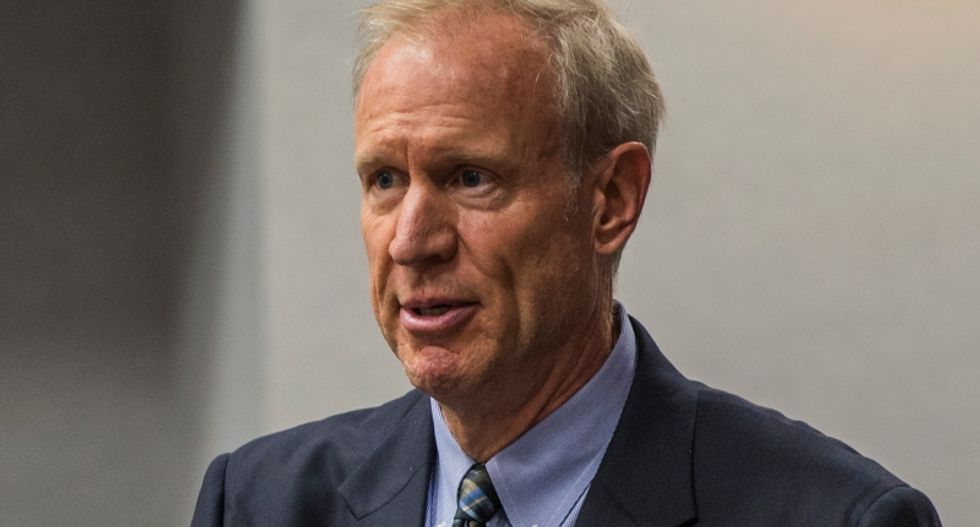 Illinois Republican Governor Bruce Rauner is once again in a scandal over his tumultuous personal decisions.

Last week, Governor Rauner fired his chief of staff and his entire communications team, then brought in employees of a right-wing think tank, the Illinois Policy Institute. Yesterday, the governor fired his handpicked "body man" Ben Tracy for homophobic and racist tweets. Now another newly hired staff member is at the center of a scandal over past social media posts.

"One of Gov. Bruce Rauner’s new communications aides has argued that abortion is being used 'to rid the world of disabled and other 'unwanted’ persons' — comparing it to Nazi Germany," the Chicago Sun Times reports.

Ben Tracy was fired on his first day on the job. This communications specialist, Brittany Carl was only hired last week.

For now, at least, it appears the Rauner administration is standing by the staffer, who also advocated dissolving teacher's unions.

"Any of the writing Brittany did before she worked for the state reflect her personal opinion, not the opinion of the administration," Rauner's recently hired communications director, Laurel Patrick explained.. "If you’re going to quote from her past writing, she asks that you please quote accurately and with full context."

That statement is far more supportive than the one Patrick issued yesterday on Ben Tracy.

"These tweets are unacceptable," Patrick told Politico. "The individual in question is no longer an employee of our administration."

"The governor has always portrayed himself as a social moderate, focused more on fiscal issues than social ones. Rauner and First Lady Diana Rauner have contributed hundreds of thousands of dollars to abortion rights groups jointly and through their family’s not-for-profit foundation," the Sun Times revealed. "But the shift in Rauner administration employees shows he’s moving farther to the right. Many staffers who were either fired or resigned were moderate Republicans — and said they were able to get Rauner away from an anti-union and right-to-work agenda to focus on attainable reforms."

The turbulent staffing situation isn't just due to firings, but also resignations.

"Several former staffers told POLITICO that a slew of resignations followed the firings, due to Rauner's heavy reliance on a hardline conservative think tank, the Illinois Policy Institute. The resignations continued today, including an official who once held a critical policy role in the administration, the office's digital staff and the Washington D.C. liaison to the governor’s office," Politico reported. "Before the staff shake-up, it was the office policy to research any potential political appointee before giving them a job, including vetting their social media, said a former member of the Rauner administration."

The Sun Times has been tracking the list of hirings and firings.

Christie Davis, secretary to the chief of staff

Mike Mahoney, chief of staff for policy and legislative affairs

Rather than follow a coherent judicial philosophy, the rightwing swings wildly from one theory of interpretation to another to suit their political agenda, not legal principles.

A Bulgarian woman dubbed the "Crypto Queen" after she raised billions of dollars in a fraudulent virtual currency scheme was placed on the FBI's 10 most wanted list Thursday.

The Federal Bureau of Investigation put up a $100,000 reward for Ruja Ignatova, who disappeared in Greece in October 2017 around the time US authorities filed a sealed indictment and warrant for her arrest.

As Chinese leader Xi Jinping left Hong Kong Friday after a rare visit to celebrate the 25th anniversary of the city's handover from Britain, reactions to his speech ranged from deeming it "reassuring" to terming his stance "delusional".

The Chinese Communist Party places great importance on anniversaries, and the trip presented Xi with an opportunity to emphasize China's authority over Hong Kong after three years of political upheaval there.