Illinois risks rating cut to junk even with budget: Moody's 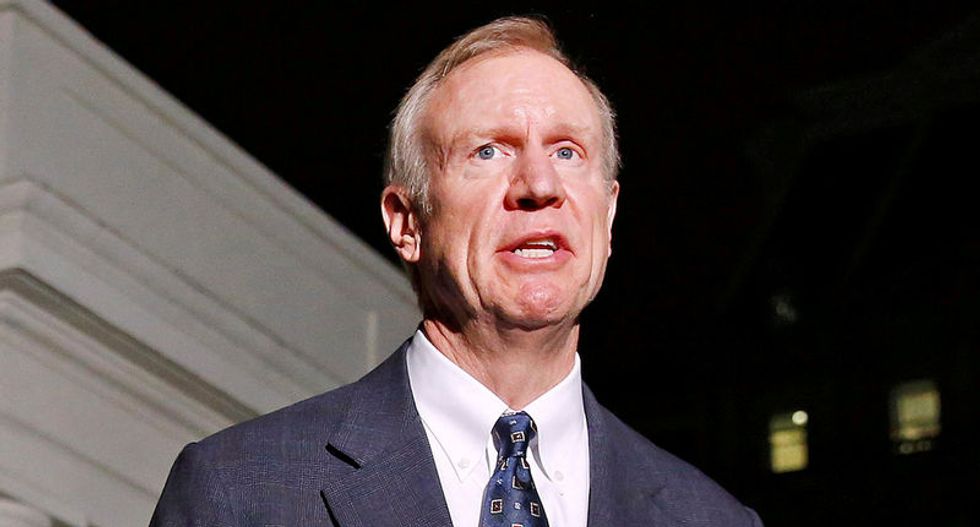 FILE PHOTO: Illinois Gov-elect Bruce Rauner speaks to the media after a meeting with U.S. President Barack Obama and other Governor-elects from seven U.S. states at the White House in Washington December 5, 2014. REUTERS/Larry Downing/File Photo

By Dave McKinney and Karen Pierog

CHICAGO (Reuters) - Even if Illinois' House of Representatives takes action to enact a new budget on Thursday, the state still risks a downgrade in its credit rating to junk, Moody's Investors Service warned on Wednesday.

Moody's said it placed Illinois' Baa3 rating, which is one step above the junk level, on review for a possible downgrade.

The $36 billion fiscal 2018 budget and $5 billion income tax increase passed by lawmakers over the extended Fourth of July holiday weekend, may fall short in addressing the state's financial woes, particularly its huge unfunded pension liability and $15 billion unpaid bill backlog, according to Moody's.

"On both those fronts, it's not yet clear if the legislation being enacted will have a substantial and clear positive effect," said Moody's analyst Ted Hampton.

A stalemate between the Rauner and Democrats who control the legislature has left the nation's fifth-largest state without a complete budget for two-straight fiscal years. Since fiscal 2018 began on Saturday, the House and Senate in bipartisan votes passed budget bills to avoid Illinois becoming the first-ever U.S. state whose credit is rated junk.

Rauner vetoed the bills on Tuesday only to have that action quickly overridden by the Senate, leaving the fate of the budget in the hands of the House.

Prior to Moody's announcement, Rauner said his Democratic opponents should prioritize the opinions of Illinois residents over credit ratings agencies.

“Don’t listen to some Wall Street firm,” Rauner told reporters Wednesday at a Chicago event. “That’s not what matters.”

The governor also said he is working to sustain his vetoes.

"I can tell you this, we are doing everything we can to push that my veto is not overridden," he said.

He lashed out at those who defied his wishes by voting for the Democrats' budget package, including 15 House Republicans.

"What we have is a continuing failure by elected officials in Springfield on both sides of the aisle that’s been led by Speaker Madigan for 35 years,” Rauner said, referring to House Speaker Michael Madigan. “The system is broken.”

House Republican Leader Jim Durkin told Reuters that he and Rauner are attempting to persuade House Republicans supporters of the Democratic tax hike to reconsider their votes because “there’s a better deal to be had.” But Durkin stopped short of predicting the overrides could be blocked.

“I think the Democrats, if they want to get it done, find the votes,” Durkin said. “I’ve seen this before.”

Durkin said he had no plans to take punitive actions against those Republicans for their votes, but predicted “it’s definitely a possibility” some will face primary challenges from the Republican Party’s anti-tax wing in the 2018 elections.

Illinois has relied on court-ordered and state-mandated spending to keep operating. The absence of a fiscal 2018 budget shuttered major transportation projects and forced the state out of the lucrative Powerball and Mega Millions lotteries.