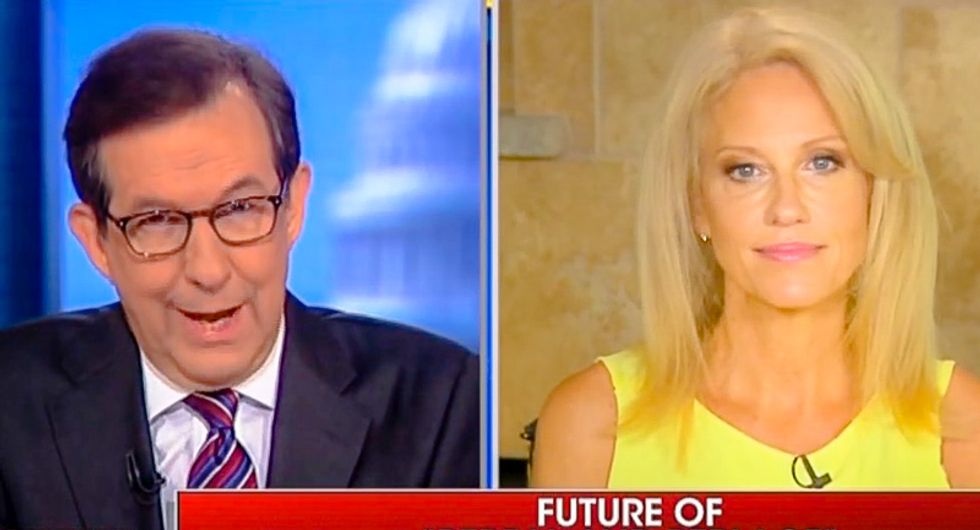 Kellyanne Conway, counselor to President Donald Trump, on Sunday deflected questions about Attorney General Jeff Sessions by slamming the media over the investigation into Russia's interference in the U.S. election.

During an interview on Fox News, host Chris Wallace became impatient when Conway tried to redirect every question he asked, from Obamacare to Russia.

"Kellyanne, you've got to allow me to ask some questions," the Fox host told her as she continued to talk. "This week the president continued to attack his attorney general... Does the president want Jeff Sessions to continue as attorney general or -- as has been suggested -- is he considering him moving over to replace General Kelly as the secretary of homeland security?"

"That's a personnel question that only the president can answer," Conway opined before pivoting to the president's campaign against "vile groups" of undocumented immigrants. "These MS-13 gangs are murdering innocent Americans and bringing drugs and violence into our communities."

"I understand that," Wallace said, trying to get the interview back on track. But Conway ignored him.

"The question is, is he considering moving [Sessions to homeland security] if the immigration part of this is so important?" Wallace asked.

"I won't comment on that but I will tell you that that the president has expressed frustration about [Sessions recusing himself from the Russia investigation]," Conway admitted. "And look at what's happened with this ridiculous Russian collusion delusion. You see all these journalists, who built entire TV sets and lower-thirds and screaming graphics and breathless coverage, now slinking away this week, Chris, from the Russian collusion coverage. Why? Because you have everyone, from Jared Kushner meeting with the House and the Senate and giving his public statement."

"You have no 'there' there whatsoever," she continued. "We were promised the next Watergate, we don't even have water polo. We don't have watermelon. It's so ridiculous and the only thing I can see happening with Russia right now is this FusionGPS matter [allegedly connected to Hillary Clinton], the Senate witness who said everybody should go look over there at what's happened. Somebody being paid by the Russians to compile a damaging dossier on Donald Trump. Again, filled with falsities and lies."

"Do you know how much time has been wasted away from the victims of Obamacare?" Conway scoffed.

"Okay," Wallace interrupted. "Let's not waste any more time. Let's talk about Obamacare... Is that the president's plan, stay on repeal and replace, change the Senate rules, end the legislative filibuster so that you can pass a fuller repeal and replace, including selling insurance across state lines?"

"The president will not accept those who said it's time to move on," the White House aide insisted. "We've met with the Obamacare victims at the White House several times now. They are real people."