Mitch McConnell: 'The man in the middle' of US healthcare war 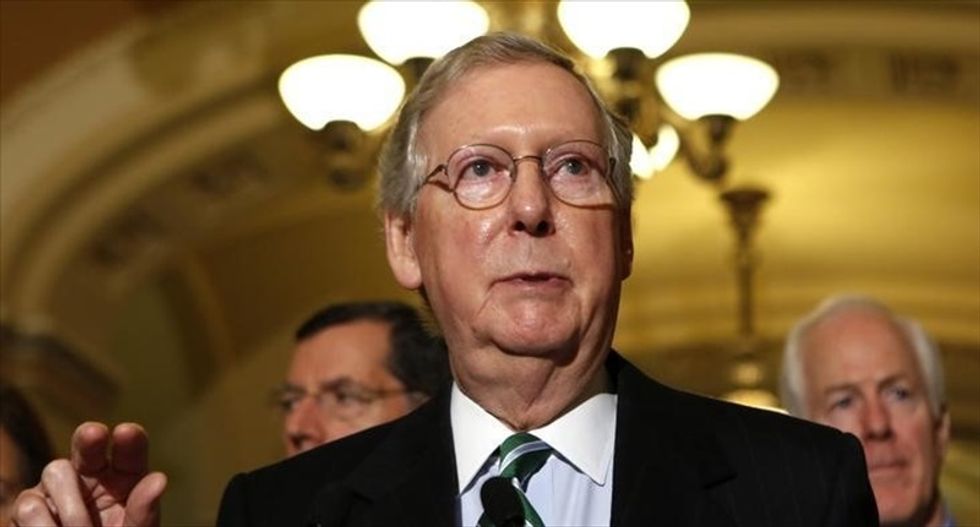 For seven years, U.S. Senator Mitch McConnell vowed to slay Obamacare if only his Republican Party controlled both chambers of Congress and the White House. Pull it out "root and branch," he pledged.

The 75-year-old Senate majority leader now has that luxury.

But instead of basking in the glow of his first major legislative victory in the Donald Trump era, McConnell is what a source close to the majority leader calls "the man in the middle in an impossible spot."

Late on Monday and again on Tuesday, after a long struggle, McConnell's efforts to repeal all or portions of former President Barack Obama's landmark 2010 Affordable Care Act and replace them with less expensive healthcare came crashing down.

With 52 Republican senators in the 100-member chamber, McConnell could lose only two of his colleagues on any bill that was opposed by Democrats and still win with Vice President Mike Pence casting the tie-breaking vote.

Three times, he failed to muster the 50 supporters needed.

The man who epitomized "the party of no" in Democrats' eyes during Obama's presidency, especially when he slammed the door in February 2016 on Merrick Garland's Supreme Court nomination, fell victim to the "no" of fellow Republicans.

"We finally get a chance to repeal and replace, and they don't take advantage of it," Trump, six months into his four-year presidential term, said on Tuesday.

Across Washington, there was dismay Republicans could not deliver on a promise they assert helped them to assume control in January of Congress and the White House.

"I am kind of shocked," said Republican Representative Dave Brat, of the conservative firebrand House Freedom Caucus that has been a thorn in the side of the Republican establishment.

His hand weakened, McConnell could be heading into fierce budget battles, a tax reform fight and a storm over legislation avoiding a government debt default that could shake global financial markets.

The result has Democrats feeling emboldened 16 months before the next congressional elections.

Around town, the sphinxlike McConnell is known as a master of Senate rules, able to outfox opponents, giving nothing away until he can strike at just the right moment.

The senator's leadership job, a position he yearned for in the years leading up to his 2015 ascension, does not appear to be in jeopardy.

But this rocky run calls into question McConnell's reputation as a master tactician and deal-maker that he earned as Republican minority leader under the Democratic Obama.

It is "a real blow to Republicans in Congress generally and to leadership," said former Senate Majority Leader Trent Lott, a Republican.

More of the blame sits with the rank-and-file, Lott said. "The problem in Washington today is not lack of leadership. The problem is lack of followership."

Had McConnell succeeded, Lott said he would have been "considered a magician" given the inability of Republicans to coalesce around healthcare legislation for so many years.

A Republican operative with ties to McConnell saw a possible silver lining: Failure to pass healthcare could boost chances for tax reform or infrastructure investment if Republicans felt it a more urgent political imperative to rack up a win for Trump before the November 2018 congressional elections.

McConnell, a courtly Kentuckian who can appear at pains to speak to reporters nipping at his heels, won accolades in years past for cutting deals with Democrats to keep the government operating and making permanent most of former President George W. Bush's tax cuts.

Those deals involved giving voters government services and lower taxes. But Republican healthcare legislation involves taking something away from millions of lower-income people - their medical coverage.

"In part they (Republicans) misunderstood how difficult it will be" to repeal and replace Obamacare, former Senate Majority Leader Tom Daschle, a Democrat, said in a phone interview.

Republican rhetoric against Obamacare was so "hyperbolic" it had to take priority early in Trump's presidency, but senators lacked enthusiasm for legislation, said Daschle, who like Lott lobbies on behalf of healthcare interests.

Once boxed into healthcare, McConnell took another controversial step, one that many Republicans questioned.

Instead of developing a healthcare bill in public, McConnell and his top aides, with the advice of a 13-member group of male senators, called the shots.

McConnell said hearings were unnecessary, as healthcare policy had been intensively debated since Obama took office in 2009. He said he was listening to suggestions of all of his 51 fellow Republican senators.

Many senators felt disconnected and tensions boiled over.

As Monday wore on, matters only got worse for McConnell.

Republican Senator Ron Johnson publicly accused him of "a real breach in trust" in hard-charging back-room negotiations. He threatened to withhold support for the bill.

McConnell supporters argued that no matter how he handled the private negotiations, the Republican leader was dealt a difficult hand from the outset.

"The majority leader is trying to keep all the frogs in the wheelbarrow and it's a tough job but he's doing a good job," said Republican Senator Lisa Murkowski.

And then there was Trump.

As McConnell struggled, the president was in France last week celebrating Bastille Day before jetting back to the United States to attend a tournament at his New Jersey golf course.

He tweeted about his excitement at the tournament, his disgust with "fake news" and an investigation into Russian influence in the 2016 election. Trump boasted that the White House "is functioning perfectly" and "I have very little time for watching T.V."

Missing, some Senate aides said, was Trump traveling the country in a serious effort to bolster support for McConnell's efforts.